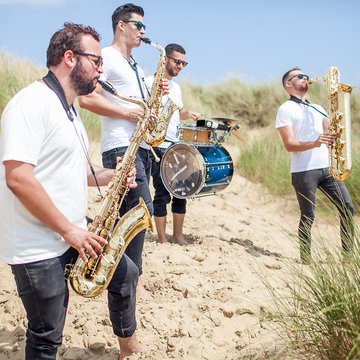 About More Is More

Hard hitting heavyweight brass band ‘More Is More’ is an exciting collaboration of some of the best young instrumentalists of their generation playing their own innovative brand of improvised and modern dance covers. Together and individually they have played at venues such as Royal Ascot, Wembley Stadium, The O2, The Monaco Grand Prix, The Royal Albert Hall, and main stages at Shambala, Bestival, and Boomtown festivals. They have performed with artists such as Beverley Knight, Lee Ryan and Beardyman. The band is comprised of baritone, tenor and alto saxophones, as well as a one of a kind customised portable drum kit, and are equally as powerful whether roaming or performing on any sized stage.

As an instrumental act we don't have a singer. We strive to ensure the line-up you see is what you get for your event. We do have pre-audititioned 'deps' available in case a band member is unavailable. Our reputation means everything so you can be confident that all of our players are of a very high level and all 'deps' have performed with us in the past.

We occasionally perform as a 3 piece ensemble. We really recommend the 4 piece for the full effect but performing as a trio is an option that we would be happy to discuss!

Absolutely. This is a really popular request and we actually offer this service for free so long as there is a PA on site or if this has been added on to our booking.

We're a very quick act to set up and are usually ready in about 30 minutes.

Our performances are based on audience reaction and who happens to be on the dancefloor at the time. If it’s a younger bunch then we’ll play some more modern dance and house tunes and if it’s an older crowd we might do something more oldschool like some 80s music! However, we're definitely happy to chat through and make sure we find what works for you.

We usually perform as an acoustic act which also means we are completely mobile and reduces set up time. PA and lighting system are not included in your quote but we can add these on at an extra cost. Please let us know what you need and we will be happy to quote.

If you do have any specific requests, please let us know! Generally we're happy to through a few requests that don't feature on our set list in free of charge. We may occasionally charge extra if this will require a significant amount of time to arrange and rehearse.

You can read our reviews and testimonials for a clear idea of what clients enjoy!

Verified
Jake B, 10 months ago

They were incredible, we had them coming in as a surprise straight after the ceremony, we asked them if they could play a few songs that they didn't have on their playlist and nothing was too much trouble for them. They were so cool about everything and made our day just that little bit more special. At least two people at the wedding wanted to use them for other weddings. Perfect.

I booked the band to play at my husband's surprise 40th birthday party in London. From initial contact to finishing the gig the guys were fantastic. Great communication, very flexible, reliable, incredible musiciansand wonderful sense of humours. They were well up for have a go at a song they'd never done before and it turned out to be the song of the night! Thanks so much guys, I'd recommend you in a heartbeat!!

These guys were incredible. We booked them to lead us and our guests on a 10 min walk from our wedding ceremony to reception venue. It was by far one of the best moments of the day and a memory my husband and I will treasure always. Our guests were blown away too. Thanks guys!

You absolutely smashed it out of the park! Your style and energy were exactly what we were looking for, and you made a huge impact on our day :) it was really good fun, we loved when you got on the chairs at the end and really put your backs out! Quite a few people said it was the best wedding entertainment they'd ever seen (and they're not wrong!)

An amazing performance that got the crowd dancing from start to finish!

Our guests were blown away by how brilliant you all were, we absolutely loved it and didn’t want it to end. Thanks also because we were running late.

You guys were incredible (exactly what we wanted) thanks to you and the other musical wizards involved!

These guys were incredible. We booked them to lead us and our guests on a 10 min walk from our wedding ceremony to reception venue. It was by far one of the best moments of the day and a memory my husband and I will treasure always. Our guests were blown away too. Thanks guys!

THANK YOU SO MUCH for such an amazing set at our wedding. You guys were incredible and it just wouldn’t have been the same without you. You’ve built quite the fan base so hopefully we’ll all be coming to see you in London soon!