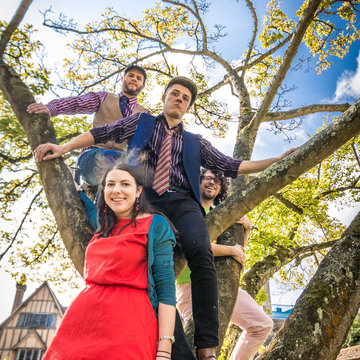 About Monkey See Monkey Do

Monkey See Monkey Do is a band of four young musicians from Southampton and London. Aaron Horlock (guitar, lead vocals), Sam Horlock (fiddle, backing vocals), Helen Gentile (clarinet, backing vocals) and Matt Aldous (bodhran, backing vocals) work together to create arrangements of folk songs and tunes as well as writing material of their own. Their main influences are from English and Irish folk songs, with a few European folk tunes thrown in for good measure! Since 2015, Monkey See Monkey Do has performed at a number of prestigious venues across the south of England, including Winchester Folk Club, The Fo’c’sle Folk Club and Folklights. Having taken time to hone their repertoire since the release of their EP, ‘Colouring Outside the Lines’ (2014), the band has since released their debut album, ‘The Night Out’ (2018) available on all good streaming platforms. Monkey See Monkey Do are performing at major folk festivals in 2021, including Purbeck Valley Folk Festival and The South Downs Folk Festival. Critical review of The Night Out: “A cracking album” – Mike Harding (ex-host of the BBC 2 Folk Show) “Thoroughly enjoyable” – Songlines Magazine “A genuine delight” – FATEA Records

We have a range of modern songs we're happy to perform in addition to the traditional Ceilidh music. However, we are not a covers band.

Our standard line-up is: fiddle, guitar, clarinet and bodhran + caller (for ceilidhs). However, if you would like a particular instrument, just let us know as we often collaborate with other musicians.

Absolutely. This is a really popular request and we are able to provide background music inbetween sets as part of the service. Although we do not offer a DJ service, we are able to offer a disco service using our lights, together with a pre-prepared playlist from a phone, for an additional fee.

Yes we do! We have a fantastic caller as part of our Ceilidh band who teaches the dances throughout the evening, in a fun and inclusive way so that everyone can join in. It is always a lot of fun!

Yes! We provide all of the equipment that we need to perform and this is included in the quote.

If a song isn't included in our song list there may still be a chance we already know it. If there is a special song you'd like us to learn we may be able to do this for you so please do ask.
Monkey See Monkey Do

Monkey See Monkey Do, along with their caller were absolutely fantastic at our wedding. Everyone had such a great time at the evening's ceilidh, including many first timers. The caller made fantastic use of the space and kept everything fun for everyone and the band played superbly. They really helped contribute to a magical evening and I would highly recommend them to anyone else looking for a ceilidh band that leans into the fun and chaos that a proper ceilidh should be.

Reply from Monkey See Monkey Do

Thank you Christopher! We were honoured to be a part of your wedding day and it really was great fun all round. Thank you for welcoming us so warmly and we wish you all the best for the future!

Fantastic musicians and caller. Good variety of dances and everyone was encouraged to get involved. Caller took the time to let a disabled member of the party know which dances they could participate in. Really impressed by the whole evening!

Reply from Monkey See Monkey Do

Thanks Rachel. The band had a fantastic time we are really glad you had such a wonderful evening!

Helen was great to communicate and plan with before the day. The band were very flexible on the day as dinner was running a bit late. The players were excellent, fun, and lively - really inspired everyone to get up and dance. And the caller was just great - amusing and encouraging and set just the right tone. A fantastic night for all ages and abilities. Thank you

We booked Monkey See Monkey Do for our wedding a few weeks ago and they were utterly brilliant. Put simply, we would recommend them to absolutely everyone! All of our guests have told us that the ceilidh was the highlight of the day - both those who have been to ceilidhs before and those who had never even heard of a ceilidh. Not only did all enjoy it but many of our our guests had never been to a ceilidh before and the entire band were excellent with the first-timers - the caller had the patience of a saint organising our rabble! The cherry on top of it all was that Monkey See Monkey Do were complete professionals, communicated really well prior to the event, and just quietly turned up and got themselves setup in the background and required no input from us when we were at our busiest on the day. Lovely people and a fantastic ceilidh band - we would recommend them to everyone!

CH
Claire H
4 years ago, for a Wedding in New Forest National Park

Thank you so much for organising a fantastic ceilidh on Saturday night for our daughter's wedding party - your music was just what we needed and you had everyone up and dancing!! We've had loads of lovely comments from our guests and I will certainly be recommending you if anyone is after a band!!

HK
Hayley K
4 years ago, for a Wedding in Lyndhurst Rd

"Fantastic music. A really special addition to our big day!"