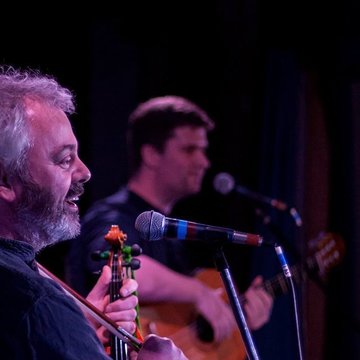 About Mitchell and Vincent

We are a folk duo who play a mix of traditional tunes and songs on fiddle and guitar.
Folk band
Stoke-sub-Hamdon
Public liability insurance of £1 million
Verified profile

R2 (Rock’n’Reel) Magazine “sensitive and stirring reading of traditional folk song, ‘High Germany’. It’s a fine example of the classy musical authority they wield on new album, Circling the Square.” Acoustic Magazine review of our second album “Circling the Square” “at all times, the interplay between David Mitchell’s guitar – a classical model he made – and Graham Vincent’s fiddle is quite stunning.” “the thoughtful arrangements interspersed with Graham’s quiet, sincere vocals create an album of unusual charm and dignity”. Bright Young Folk review of our second album “Circling the Square” (review by Andy McMillan) “their sound is much deeper and richer than you would expect from an acoustic duo. Intricate instrumentalism and pulsing rhythms abound, with fiddle and guitar playing styles that span the ruggedness of session playing to the gentle virtuosity of lament and love song. They display a deep understanding and appreciation of their instruments, further enhanced, possibly, by them both being skilled luthiers.” “High Germany features haunting fiddle with gentle and delicate guitar playing in support of Graham Vincent’s excellent vocals in a memorable interpretation.” “Hector the Hero…. One cannot help but be touched by the excellent interpretation of James Scott Skinner’s poignant Scottish lament” “Established lovers of traditional music, and those newer to its delights, will equally enjoy this fine offering from Mitchell and Vincent. Circling the Square captures the intimacy, warmth and welcome normally only found at a local folk venue, whilst providing skilled arrangements and expert delivery of tunes and songs which showcase the vibrancy, and variety, of folk music across Britain. A thoroughly engaging and enjoyable experience.” fRoots Magazine review of our second album “Circling the Square” “poised and lively refinement” FolkWords review of our second album “Circling the Square” (review by Charlie Elland) “I would include their album ‘Circling The Square’ on your ‘must listen to this’ list.” “there’s a clear and obvious enticement to listen to their music.” FATEA review of our second album “Circling the Square” (review by Tony Birch) “you will find music that is beautifully played, with a delicacy and lightness of touch” “It’s an album to listen to, and appreciate, and grows in stature at each play.” Artree Live 2017 Guitarist David Mitchell and fiddle player/vocalist Graham Vincent have been gaining an enviable reputation on the folk circuit in the UK in the last couple of years – both at clubs and festivals. Their debut Artree Live performance in 2015 was so well received – we had to have them back to headline! Bradninch Folk Club – Bradninch 2016 “David Mitchell and Graham Vincent proved to be masters of their art” Brunny Folk Club – Bournemouth 2016 “Our headliners were the stunning Mitchell & Vincent. They brought us rousing tunes, haunting melodies, & songs that had the Brunny choir in full voice. If you haven’t seen them before you’ve certainly missed a treat!” Andrew Knutt – Director of Creative Innovation Centre CIC Taunton – October 2015 “breathtaking music and performance” Lyme Folk Weekend 2014 “But here at Lyme Folk Weekend we are, deep down, just a bunch of traditional old folkies, so we’re picking as our personal highlight of the weekend, among a whole host of excellent candidates, the simple but brilliant fiddle and guitar of Mitchell and Vincent, bringing the Sunday night Pilot Boat crowd to tears one moment and to their feet the next.” Tim Edey (BBC Radio Two’s Folk Musician of the year 2012) 2014 “They were flippin’ brilliant” Bradford on Avon Folk Club 2014 “…….you are a superb team amazing playing and Graham has a fantastic voice, a really enjoyable night, thanks again” Wessex Folk Festival 2013 “Mitchell and Vincent’s performance at this year’s Wessex Folk Festival was excellent. Distinctive yet fresh traditional folk produced by two musicians who know how to play their instruments and tell stories with their melodies. If you get the chance, go see the guys as it is well worth it.” We play a few private parties, weddings, wakes and house parties, so: Wedding – June 2016 “I just want to say an absolutely massive thank you for playing at our wedding back in June! You are both phenomenally talented musicians who are also such lovely, friendly, kind, supportive people!!! I don’t know if I can express how much it meant to come out from the wedding ceremony and see you both sat playing away in the gazebo, exactly as we discussed!! We thoroughly appreciate it, and wish you the very best, thank you a million times over xxx” Wedding – August 2015 “Just wanted to say a big thank you for playing at our wedding back in August. You guys were fantastic, the guests loved your music and you couldn’t have been a better fit for Pilton Tithe Barn! Thanks again!” Wedding – May 2015 “My wife and I want to thank you for playing our wedding on Saturday. It was perfect, everybody loved it and you were great.” Wedding – July 2014 “I just wanted to send you a quick email to say thank you so so much for the absolutely beautiful music on our wedding day at the end of July. Everybody said how wonderful the music was and it fitted so well with the venue………….. we were so grateful and the music was just perfect.”

Various tune sets and songs from the British Isles

Standard Prices
2 musicians
All prices include:PA as required (up to 100 people) - large weddings. parties and festivals will mean you need to supply stage, lights and PA.

Great personalities and got everything dancing, a great night. Thank you from us at Kingston Country Courtyard

Guitarist David Mitchell and fiddle player/vocalist Graham Vincent have been gaining an enviable reputation on the folk circuit in the UK in the last couple of years – both at clubs and festivals. Their debut Artree Live performance in 2015 was so well received – we had to have them back to headline!

That was really wonderful

at all times, the interplay between David Mitchell’s guitar – a classical model he made – and Graham Vincent’s fiddle is quite stunning.