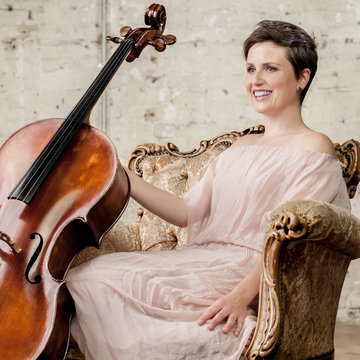 Miriam is a Cellist who loves to perform a wide variety of music at events! She's played with Dua Lipa, Yungblud, Il Divo, Pete Tong!
3 of 8 photos
Cellist
Bristol

Cellist Miriam Wakeling is in high demand in both the studio and the concert hall, enjoying a varied career as a solo, chamber, orchestral and session musician. During 2019 Miriam toured extensively around Europe, as far as Moscow with iconic disco producer and musician Giorgio Moroder. Shortly after this Miriam was invited to play Principal Cello with Trevor Horn’s Sarm Orchestra to tour the UK’s major concert halls, performing ‘Trevor Horn Reimagines the 80’s.’ Later highlights in 2019 included a x10 date tour with Beverley Knight performing Stevie Wonder Songs with The Leo Green Orchestra, taking BBC radio 2 Friday Night Live around the UK. December 2019 Miriam toured again with the innovative Heritage Orchestra and Pete Tong, performing at the UK’s Stadiums. Miriam performs regularly with the London Symphonic Rock Orchestra (LSRO), who toured with Il Divo in 2019, which included a sold out performance at the Royal Albert Hall, where Miriam also performed with string quartet ‘Q Strings.’ ‘LSRO’ regularly perform with ABBA The Show, which Miriam toured with in Germany and Denmark in 2019 and Brazil and Bulgaria in 2018. Also in 2019 Miriam appeared on BBC radio 1 Live Lounge with Yungblud and on BBC 1 ‘The One Show’ with The Vamps. Miriam has collaborated with the likes of Roger O’Donnell of The Cure, live and in studio, and in the recording of the music for BBC 1 David Attenborough documentary, ‘Dynasties.’ After receiving a BMUS (hons) from the Royal Welsh College of Music and Drama in 2010, whilst studying with Richard May, Miriam gained a Masters in Music performance from Trinity Laban Conservatoire or Music and Dance in 2013, where she held the Ludwig Lebell Scholarship and The Leverhulme Orchestral Mentorship Scholarship. Miriam won first prize in the Leonard Smith and Felicity Young Duo Competition and twice first prize in The Cavatina Chamber music competition, under the tutorage of Richard Markson and Natalia Pavlutskaya.

No problem, I will always try my best to be flexible to help ensure your event runs as smoothly as possible. If timings change slightly just let me know.

I usually arrive 45 minutes- 1 hour before the event time, to set up and get ready.

Yes absolutely! I can also find additional pieces not on the list

Yes, no problem, just let me know what you'd like!

Standard Prices
All prices include:A single speaker, if needed, for extra amplification of the cello.
NEW!Virtual services
Personalised Music Message
Book me to create a unique music video for you to send to a friend as a gift. This could be a birthday message, first dance song for a wedding anniversary, or just your friend's favourite song to cheer them up.
£15

Miriam played my cello part beautifully, and supplied excellent recordings well within the deadline. I will definitely come to her again for remote cello session work!

This was my second collaboration with Miriam. I was totally blown away by the crystal clear sound, creativity and passion that she delivered back at our first collaboration but this time she even exceeded. I am beyond happy by the quality, pristine sound and professionalism she puts into every job. I have goose bumps listening to her cello and I am looking forward to many more collaborations! I highly recommend her and I am so glad I have found her here. Thank you!