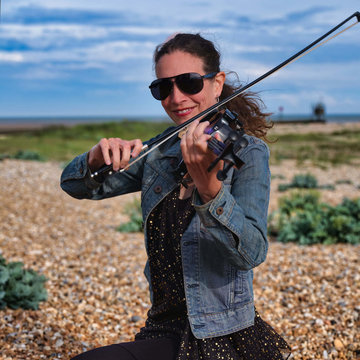 If you want an instrument that is a little bit different, then go for the viola!
3 of 18 photos
Violist
East Sussex

Miriam Eisele has been a professional violist and music teacher for over twenty years. She studied at the Royal Academy of Music, the Purcell School, and then at the Royal College of Music with Simon Rowland-Jones and Grigory Zhislin. As a student she won a number of prizes and scholarships, gained a first class honours degree, and then continued her music studies at post-graduate level. Miriam is also a fully qualified music teacher, having obtained a Postgraduate Certificate of Education from London University. She has performed on BBC radio 3 on various occasions, including the live pre-Prom BBC radio debut broadcast of Robin Holloway’s trio for viola, clarinet and piano. She has given both solo and chamber music recitals over the years, and was a founder member of the Alexander Piano Quartet. Her career has taken her to countries such as China, Korea, Gabon (for the President, to celebrate the centenary of Albert Schweitzer's Lambarene Hospital), Turkey, Switzerland, Spain, Germany, Italy, America, Cyprus, Slovenia, Romania, Austria, France, Norway, Bermuda, and Greece. Miriam appeared with the singer Craig David, both on live BBC TV when he sang the 2016 'Children in Need' official song, and also in the subsequent music video recording. She played for Queen Elizabeth during her Golden Jubilee celebrations, and on another occasion for Prince Charles. As a soloist (on stage, amongst the dancers!) Miriam has toured nationwide with the Richard Alston Dance Company, and as an orchestral player and chamber musician she has often appeared in major British venues such as the Festival Hall, the Albert Hall, Abbey Road Studios, and St. Martin-in-the-Fields. Miriam has worked with many major orchestras and ensembles during her performing career, including the Philharmonia, London Philharmonic, Royal Philharmonic, BBC Concert, Bournemouth Symphony, BBC Philharmonic, BBC Scottish, English National Ballet, English Festival Orchestra, English Symphony Orchestra, Norwegian Radio Orchestra, English National Orchestra, Fine Arts Sinfonia, London Orchestra da Camera, Bennelong Ensemble, Oxford Philomusica, Trafalgar Ensemble, Kings Chamber, and Belmont Ensemble. She has also performed on a number of occasions with the English National Opera and Glyndebourne. If you have a particular tune which you would like Miriam to play, she would be happy to learn up to 5 new tunes/either with backing track or unaccompanied. She can also play a tune by ear if you are able to sing it to her! Miriam would like to credit the following sites for allowing her to use their backing tracks, either for recording purposes or for performing purposes: Karaoke version Tency Music Piano Accompaniment Tracks Musicians Backing Tracks

My clients love my friendly approach and also the fact that I enjoy interacting with the audience if appropriate. They also love the sound of the viola, and I have yet to try out the electric violin.

I always try my best to be flexible to help ensure your event runs as smoothly as possible. If timings change slightly in the run up to the event just let know and I will see what I can do.

One hour before the event.

Of course you can!

Yes, absolutely! I bring my own instrument and small PA system.

Yes I can, if I am given enough notice.

Standard Prices
All prices include:PA equipment and up to 5 songs of your personal choice which are not already on the list.

We recently celebrated our Golden Wedding Anniversary, and as part of the al fresco party, we were thrilled to be able to listen to Miriam playing her electronic violin. She played a selection of suitable pieces, which all got the toes tapping! In fact nobody wanted her to stop, as the performance was so professional. We would thoroughly recommend inviting Miriam to play for you at whatever event you are planning. People who were at our 'do' are still talking about the music now! Lesley and David Turner

I attended Miriam's 'Last Night of the Proms' along with many others and I can say without hesitation that we all found it a joy from start to end. Not only does she have an extensive playlist – an intoxicating mix of classical and popular music as well as the traditional 'Last Night' favourites – but she also dressed up for the occasion as if she was at the Royal Albert Hall itself! Her engaging personality and mastery of her viola ensured it was truly an evening to remember! I can't recommend her 'Last Night' experience enough.

Martin Lane, 2019 Just brilliant! Miriam played a wonderful selection of songs that appealed to all ages. As well as giving a first-class performance she got everyone involved, young and old, singing along and waving flags. We had a great time. Thank you, Miriam!

Amian A, 2 years ago

The age range was from eight to eighty-eight, but Miriam kept everybody - even the shyer audience members - fully engaged, entertained, and joining in 100%. Her 'Last night of the Proms' programme was a mixture of light classics, popular music, and the traditional 'Last Night' favourites, and she made sure to dress for the occasion, which was the icing on the cake! We hope that this will be an annual treat, and look forward to seeing her regularly and hearing a lot more of her extensive repertoire.

Just brilliant! Miriam played a wonderful selection of songs that appealed to all ages. As well as giving a first-class performance she got everyone involved, young and old, singing along and waving flags. We had a great time. Thank you, Miriam!

Miriam was wonderful, she's very graceful and adds a personal touch to her performance and took the time to get to know each of the residents. Our residents really enjoyed the music and she took each performance very seriously and played the songs beautifully.

Our residents where enchanted by Miriam and enthralled by her playing at a recent mini concert she gave at Whitegates Care Home. To have such a talented musician in our lounge was a special privilege and Miriam’s enthusiastic engagement with our residents was much appreciated. One said, “The viola had such a wonderful sound… it’s a beautiful instrument and was played beautifully by Miriam. I asked her to play a special song and she is going to find it and practise it for next time. I hope we have her back soon.

I can highly recommend Miriam, who I have known for many years. I can vouch for her outstanding musical ability. She is able to adapt to the need of most events, especially funerals and receptions.

Great Music . The residents really enjoyed it and Miriam took time to chat with them . Residents are already asking when we could have her again.

I booked Miriam for a church dinner which I was organising. She was totally professional and friendly. She arrived in good time to chat informally with guests and to set up ahead of time. She played beautifully and I would not hesitate to book her again. If I had to score her out of 10, it would be 11.

I attended Miriam's 'Last Night of the Proms' along with many others and I can say without hesitation that we all found it a joy from start to end. Not only does she have an extensive playlist – an intoxicating mix of classical and popular music as well as the traditional 'Last Night' favourites – but she also dressed up for the occasion as if she was at the Royal Albert Hall itself! Her engaging personality and mastery of her viola ensured it was truly an evening to remember! I can't recommend her 'Last Night' experience enough.