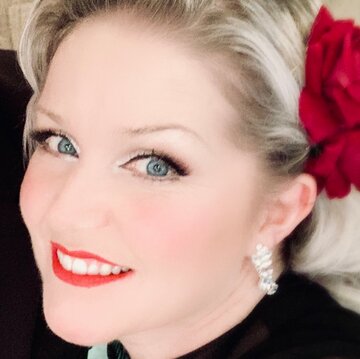 Miranda started her professional showbiz career at the age of 4 when she was asked to guest star in an ‘Old Time Music Hall’ theatre show after the producer spotted her performing in a talent contest. Years later, after graduating from the prestigious Arts Educational Schools, London, she burst onto the Musical Theatre scene in the original UK Tour of ‘42nd Street’ with Bonnie Langford. Miranda then played the role of 'Estella' and understudy to 'Maria' in the Leicester Haymarket Theatre production of ‘West Side Story’ which included recording the cast album with the National Symphony Orchestra at the world famous Abbey Road Studios. The American Walt Disney Company producers then discovered Miranda’s voice, casting her as a principal singer in their Disney Classics Show in London’s West End. It was then a move to Germany for 13 months where Miranda played the lead role of ‘Miranda’ in the hugely successful Berlin production of ‘Return to the Forbidden Planet’. Back in the UK, she returned to the Aldwych Theatre in the West End as ‘Baby’ in the original cast of the Broadway smash ‘The Fields of Ambrosia’ which included another cast recording on general release. The following two and a half years saw Miranda starring as ‘Angie’ (the Una Stubbs role) in the original UK Tour and West End run of ‘Summer Holiday’ with Darren Day, Ross King and Isla Fisher. Whilst in 'Summer Holiday' Miranda performed many times on TV including being part of the final game in Jim Davidson's Generation Game for the BBC. Miranda can also be seen as 'Angie' on the 'Summer Holiday the Musical' video. Miranda now manages and performs in the highly successful tribute bands Abba Magic and RUBIX-80’s, thrilling audiences far and wide with concerts not only in the UK (including the Shetland and Channel Islands) but also France, Belgium, Holland, Portugal, Hungary, Kenya, Estonia and Romania. As ‘Agnetha’ Miranda was asked to sing live on BBC1’s ‘This Week' including a solo performance as the credits rolled.

‘I just wanted to let you know how fantastic Miranda and Zoe (Abba Divine and RUBIX-80’s) were at my 50th birthday party on Saturday night. Before the event Miranda telephoned me to discuss music and the schedule for the evening and her warm and friendly manner reassured me that everything was going to be alright even though I had never seen them performing live. Their two acts on the night brought the house down . I have never seen so many of my friends up on the dance floor for the entire evening . The girls had a real feel for their audience and delivered some wonderful jokes and ad libs. Their performance really made it a special night for me and I would not hesitate in recommending them to others’

Singers in the UK
Singers in Canterbury
Singers in Dover
Singers in Maidstone
Singers in East Sussex
Singers in Rochester
Customer Service
Discover
Company
As seen on
© Encore Technologies, Ltd.
Crafted with bagels and in London