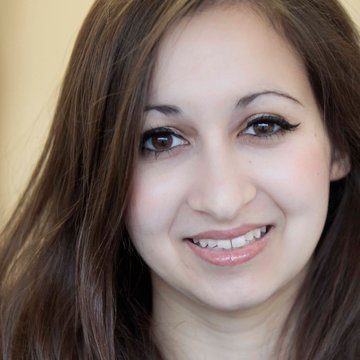 Mimi is a classically trained soprano and experienced chorister who is at home in opera, song, musical theatre and light jazz.
3 of 7 photos
Singer (Soprano)
Bordon

Mimi Doulton is a soprano of British-Pakistani origin, with a particular interest in contemporary opera and song. She has developed new opera with the Royal Opera, Mahogany Opera Group, Birmingham Opera Company, Tete a Tete, Manchester Opera Project and Snape Maltings. Recent performance credits include understudying in the Royal Opera House and Music Theatre Wales production of Gerald Barry's 'The Intelligence Park' and a UK tour as Mabel in 'The Pirates of Penzance' with Merry Opera Company. She is a Park Lane Group Young Artist, an Opera Prelude Artist and a Leeds Lieder Young Artist. In 2017/18 she was the vocal scholar at Fondation Royaumont Voix Nouvelles, won third place at the Music Club of London Competition, and was a finalist at the Dean & Chadlington Competition. As a recitalist she has premiered works at venues including Wigmore Hall, Club Inégales and Fondation Royaumont. She was part of the London Symphony Orchestra's 'This is Rattle' Festival in 2017/18, and performed Copland's 12 poems of Emily Dickinson in the Barbican Hall as part of the orchestra's Bernstein Centenary celebrations. In 2020 she will make her debut at the Southbank Centre Purcell Room. Mimi was a chorister at King's College London and performs regularly with the consort Tenebrae, as well as the professional choirs at St Paul's Cathedral, St Brides Fleet Street and the Guard's Chapel. She graduated from the Guildhall School of Music and Drama with distinction in 2018, and King's College London with first-class honours in Music and Languages in 2015.

Standard Prices
All prices include:Consultation phone-call before the event; at least one musical request