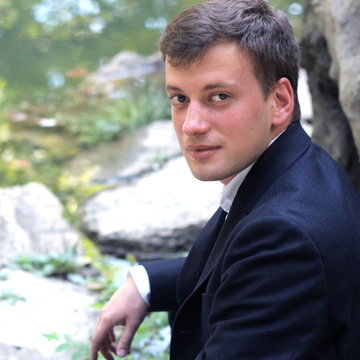 Born in Bucharest, the multi-awards pianist Mihai Ritivoiu won the Dinu Lipatti National Competition in 2010 and was laureate of numerous international competitions including the George Enescu Competition in 2011 (Bucharest), Tunbridge Wells International Young Concert Artist Competition in 2014 and Teresa Llacuna Competition in 2015 (Valence). Most recently, he was awarded the Gold Medal at the Beethoven Piano Society of Europe Intercollegiate Competition. Mihai leads an international career performing solo and chamber music recitals in Europe and Asia. He also played concertos with the Bucharest Philharmonic Orchestra, the Lausanne Chamber Orchestra, the English Chamber Orchestra and the MDR Leipzig Radio Orchestra. Regularly invited to play on BBC Radio 3’s programme ‘In Tune’, his performances have been broadcast on Radio Romania Muzical, Radio Television Suisse and Medici TV. His debut album released under the label Genuin with solo works by Franck, Enescu and Liszt has been praised as “beautifully recorded, handsomely played - a solo recital to cherish” (The Arts Desk). Graduated with the highest distinction from the National University of Music in Bucharest and the Guildhall School of Music & Drama in London, Mihai studied with Professors Viniciu Moroianu and Joan Havill. He also had the privilege to take part in masterclasses led by Dimitri Bashkirov, Dominique Merlet, Emmanuel Ax, Richard Goode and is mentored by Valentin Gheorghiu. Mihai is a City Music Foundation artist and a Yeoman of the Worshipful Company of Musicians. He has received generous support from the Liliana and Peter Ilica Foundation for the Endowment of the Arts, Erbiceanu Cultural Foundation and Ratiu Family Charitable Foundation.

SB
Sophia B
7 months ago

Mihai was fantastic! Great guy to work with, super easy to get a hold of and a fabulous player.

Mihai played a mixture of Chopin Schubert and Debussy during our wedding ceremony and it was beautiful. Mihai was professional, responsive and punctual and I would highly recommend

An excellent and rounded pianist. Thank you mihai for an amazing evening. We very much enjoyed hearing you play.

Excellent in every respect. Mihai really made our concert a great success. Thank you very much! We recommend him very highly indeed.

When it came to Chopin's Polonaise - Fantasy, Op. 61, Ritivoiu totally conveyed the dreaminess of this work, coupled with the excitement of the melodic and harmonic dance sections that Chopin is so passionately remembered for. ... The exquisite Pavane from the 2nd Piano Suite, Op. 10 [by Enescu], allowed Ritivoiu to display his mastery of temporal pacing and the control of vague harmonies in this evocative work.