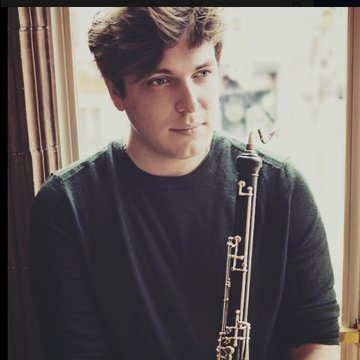 Check availability and get a free quote now - no commitment to book
From£160
About Michael
Home page
Michael Sluman
Like Michael?

Michael is quickly emerging as a sought after freelance oboists, delivering exciting performances including repertoire ranging from more tradition classical music, to exciting new premiers. As well as a busy orchestral musician where he performs regularly with a number of professional ensembles, including, Skipton Camerata, English National Philharmonic and the Northern Contemporary Collective, Michael is an active soloist promoting new works for the Bass Oboe, having worked in the composition departments at the Royal Northern College of Music and Kings College, London. Michael has premiered a number of new works at the Australian Double Reed Society conference in Sydney, the International Double Reed Society Conference in Granada, Spain and will be performing at the Rio winds festival in Brazil later in 2018. Other solo projects in 2018 include a concerto recording of Rob Keeley's concerto for Two Oboes and Cor Anglais with the Malaga Philharmonic to be released on the Toccata records and the premiere of two new concertos with the Northern Contemporary Collective. As a student Michael was awarded The Friends of Leeds College of Music Scholarship, The Alan Hawkshaw Foundation Scholarship, The Leeds College of Music Excellence Scholarship and was also awarded a £10,000 scholarship to continue his studies at a Masters level. Michael has also won awards such as the Leeds College of Music Track of the Year Award and also came first place in the 2014 Arts at Trinity Competition.