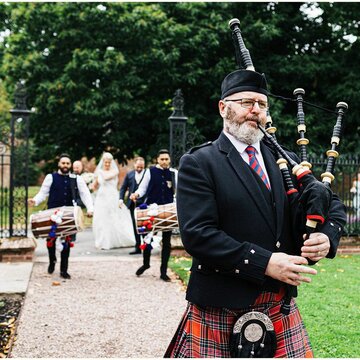 Hi I’m Mike I’ve been playing the pipes for 40 years now. Started as a kid and played with my local band in Dublin. Howth St Lawrence Pipe Band. In 1990 I moved to Manchester where I played for a couple of years with the City of Manchester Pipe Band. Later played for the Greater Manchester Pipe Band. In 2012 I joined the Manchester Fire and Rescue Service Pipe Band, in the role as Pipe Major, where we competed in various parades and competitions all over England and Scotland. Some highlights were playing at the MEN arena, with the world famous Andre Rieu and the Johann Strauss Orchestra , The Scottish Fiddle Orchestra at the Birmingham Symphony Hall and The Chieftans at the Manchester Bridgwater Hall. Competing in many competitions through out the UK. Also regularly play for Burns night suppers, Weddings, Indian weddings also catered for where Dhol drummers can also play.Birthday parties and corporate events.Also able to provide side or tennor drummers or full pipe band .

Amazing Grace
The Flower of Scotland
The Skye Boat Song
The green hills of Tyrol
When the battle is over
The Battle of the Somme
The Heights of dargai
The flowers of the forest
Scotland the Brave
Marie's Wedding
Cock of the North
Mrs Lily Christie
A man's a man for a that
Farewell to the creeks
Auld Lang Syne
And some more modern songs converted to bagpipes, please ask.
plus many other Strathspeys reels jigs and hornpipes.
Customer questions

10mins to tune up

Standard Prices
NEW!Virtual services
Personalised Music Message
Book me to create a unique music video for you to send to a friend as a gift. This could be a birthday message, first dance song for a wedding anniversary, or just your friend's favourite song to cheer them up.
£15
Michael

5 out of 5
16 verified reviews
Satisfaction

AS
April S
1 month ago

Michael was absolutely brilliant. We booked him as a surprise to play the guests into the venue and he even stayed behind late to play us out when he didn't need to. Extremely professional and friendly. Highly recommended.

It was a pleasure to play at your wedding.Thanks for the kind review Mike

Michael was a delight to deal with from start to finish. He made sure he fully understood the running order of the day, made suggestions of how to make our day even more special and you could really tell he cared. Booking Michael and having him play at our wedding provided us with a very special memory we will cherish for the rest of our life. Not only was he great by himself but he was also able to turn up on the day and play alongside Dhol drummers which sounded absolutely amazing! We have had a lot of comments by guests on how great the Dhol & pipes sounded together and how they couldn’t believe that was the first time they played together. It takes a very accomplished musician to be able to do this and take on instructions last minute. I can’t thank Michael enough for being part of our special day, I wouldn’t hesitate in recommending him or booking him again. Thank you Michael!

Michael was fantastic just what we asked for

Was a pleasure to play for your event

Excellent , he made the evening and the large crowd loved him!

SA
Sophie A
2 years ago, for a Wedding in Oxfordshire

Thank you so much for making our day so special 😊 it was our dream to have a piper at our wedding and you made it come ture. ♥ You played beautifully. Highly recommended for any occasion x

TC
Toby C
3 years ago, for a Wedding in Droylsden

We had this piper at our wedding he is absolutely amazing and very warm and welcoming and very professional. I would recommend him to anyone thank you so much for all you did.