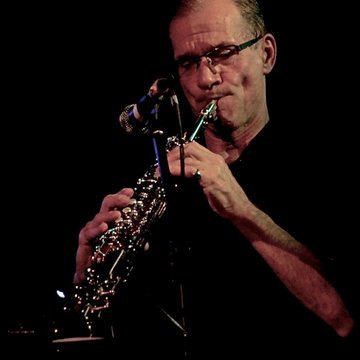 Saxophonist/ Composer. on the London Jazz scene since the 80's . Reggae in Jamaica and recently Latin with Amarea and Lokandes.

Michael Baldwin, Saxophonist and Composer. Playing on the London Jazz scene since the eighties, he ran several of his own bands and worked with Russ Henderson MBE, Gary Crosby, MBE, Denise Baptiste, John Smith, Mark Taylor and Dick Pearce. He spent over a year in Jamaica, playing reggae with the Stardust band, led by George Tucker, Skatalite Guitarist. He recorded at Tuff Gong and other Kingston studios and played with Lee van Kleef. In the USA, Mike worked with a number of groups in Portland and Los Angeles and even had the good fortune to play with a young Esperanza Spalding. Over the last few years, Mike has been playing with ‘Jardares Por Fuera’, Lokandes, Gypsy Butter and Dandaluz, London’s leading Latin and Flamenco Rumba bands.

Body and Soul. Lover man. I can't get started. Girl from Ipanema. Misty. A felicidade. Samba de Orpheu. Manha de Carnaval. Round Midnight. Take five. Summertime. Cheek to cheek. Secret love. The peanut vendor. Darn that Dream. Laura. Wave. Willow weep for me. Mack the knife. St Thomas. Take the A train. Somewhere over the rainbow. Stardust. Georgia on my mind. Skylark. The nearness of you. Pink Panther. My favourite things. My Funny Valentine. Blue Moon. My heart belongs to Daddy. Night and Day. As time goes by. Someone to watch over me. Stormy weather. Perhaps Perhaps. My Man. Autumn Leaves. Cry me a river. Sophisticated Lady. Stella by Starlight. Satin Doll. the Shadow of your smile. There'll never be another you. The way you look tonight. What a difference a day makes. Let's face the music and dance.

'I remember Amarea very fondly. It was a pleasure to have Amarea perform at the New College Ball! Mike was very easy to work with in the run up to the event and the band delivered a fantastic show on the night. Professional and charming, I wouldn't hesitate to work with Amarea again.'

Thank YOU for coming and playing at FlipSide. Amarea were wonderful, and I received a great deal of positive feedback, with everyone saying how much they enjoyed it.