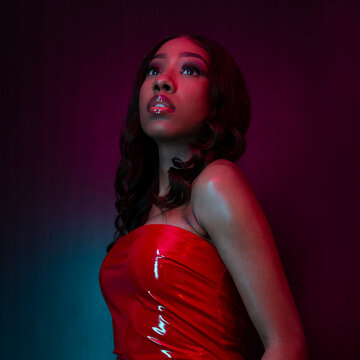 Rich, soulful and hypnotic. 10+ years of show experience! Melica is guaranteed to wow any crowd and inject energy into every performance!
3 of 3 photos
Singer
London

An R&B/Reggae/Pop act influenced by like likes of Aaliyah, Lauryn Hill and Amy Winehouse. After falling in love with music from the age of 5 I continued to study my influences and became mesmerised by their star studded performances. By the age of 12 I began doing local shows, this opened doors to compete in singing competitions throughout my teens. Often struggling with my identity during this time music became the escape for expression and self discovery- on stage is where I’ve always felt at home and blessed to share my gift. In the past 2 years I have released music of my own, receiving the backing from notable stations such as Pulse 88 and This is Westside Radio. I have continued to perform across the Capital- Performing at the Jigsaw Festival last summer was a proud moment. The first of many festivals to come.

That’s fine, I understand that timings may change slightly. If this is the case in the run up to the event please let me know.

I perform using backing tracks both available on my USB or on a disc. I do not own a PA system. I would only need 10/15 mins to set up, this includes a sound check prior to the event start time.

Yes, you’re more than welcome to choose the pieces I sing from the setlist. My priority is to ensure that the client and the guests are happy and entertained. Picking the right songs to create that environment is the first step.

I perform with backing tracks and bring the relevant equipment.

Yes, I can learn new pieces for your event if given enough time to prepare. If there is a special song you would like me to sing this would be an additional £15

Standard Prices
All prices include:All prices include a consultation to discuss your event and set list. These prices do not include travel costs. A 15 minute break is required for every hour.
NEW!Virtual services
Zoom bomb
I'll jump into your Zoom call and surprise your friends and colleagues with a unique song!
£50

Absolutely brilliant, many thanks

Melica’s performance was amazing. The crowd absolutely enjoyed her set. Melica was on time and extremely professional. Her vocal control and power was phenomenal.

Verified
Patrice B, 1 year ago

I booked Melica to perform at an event to celebrate women in different fields of the music industry for my platform Femflexx. She was the first act on and did an amazing job at opening the event and energising the crowd. I commend her vocal technique, stage presence and crowd interaction. She was a pleasure to work with an even came out her way to do a pre show interview.