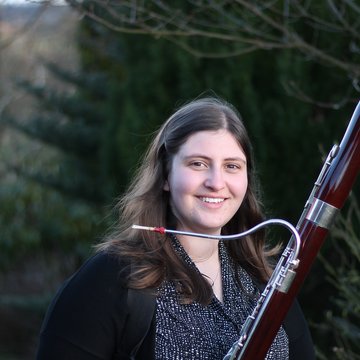 Bassoonist and tutor based in Birmingham, recent graduate from Birmingham Conservatoire.
3 of 3 photos
Bassoonist
Birmingham
Public liability insurance of £10 million

Meghan is a recent graduate from Birmingham Conservatoire where she achieved a BMus (Hons) Performance on the bassoon. She studied with Shelly Organ, John Orford, Sarah Burnett and Andy Watts and has taken part in masterclasses with Ole Kristian Dahl and Jonathan Small. During her time there, Meghan was principal of the Conservatoire’s Symphony Orchestra, Repertoire Orchestra, Wind Orchestra, Thallein Ensemble, Composers Orchestra and Pops Orchestra. She also played in the Conservatoire’s performances of Poulenc’s Dialogues des Carmelites. In her final year, Meghan won the Nicholas Hunka Bassoon Prize competition and was highly commended in the Birmingham Conservatoire Woodwind Prize competition. Outside of orchestral playing, Meghan enjoys playing for theatre shows. She now works as a freelance musician and teacher and plays regularly with Ulmus Wind Trio and the Birmingham Conservatoire LEAP Ensemble.

We booked Meghan to perform in our Peterborough Sings! concert and were delighted by her playing. The whole orchestra sounded fantastic, and we wouldn't hesitate to book Meghan again.

A highly enjoyable concert given by 3 very professional musicians. The range of repertoire was engaging and I had a lovely evening.

Bassoonists in the UK