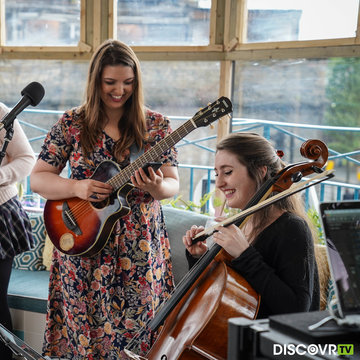 Meg Ella is a Welsh musician working in London. She graduated from Trinity Laban Conservatoire of Music and Dance in 2016 where she studied jazz vocals and cello. She now works as a professional session musician, arranger, composer/songwriter and MD in popular music and theatre in London and around the world. Performance credits include: - Performances with with artists such has Laura Mvula, Charlotte Church, The Staves, Orlando Weeks (The Macabees), Tom Chaplin (Keane) on the BBC One Show, Roo Panes, Amber Run, Tom Speight, Melanie Baker, Reeps One, Jesca Hoop, Martin Grech, Sam Frankl (One Two Many Records), IMOGEN, the Columbo Group (Re:imagine) and more. - Featured in national advertisements and marketing campaigns for clients such as Lloyd’s Bank, ALDI supermarket, Mandarin Oriental, Pandora, Tiffany, Liberty Department Store - Performances in some of London’s famous venues - the Roundhouse, Union Chapel, Ronnie Scott’s, Cadogan Hall, XOYO, Queen Elizabeth Hall, Southbank Centre, Jazz Cafe, Sheperds Bush 02, the Barbican, Kings Place, The Globe Theatre, Houses of Parliament and more. - Performances at top music festivals including Latitude, Bestival, Wilderness, Glastonbury - Fortnight World Premier run at the Roundhouse, Camden as the composer and musician for the headlining show show of Circus Fest 2018, Relentless Unstoppable Human Machine. - Recording credits with LCV and other projects include sessions at some of London's top recording studios including Maida Vale, Metropolis, RAK, Abbey Road, Urchin and live on BBC (Radio 1, BBC London) Virgin Radio (Edith Bowman and Jamie East shows) and Soho Radio. - MD, composer and performer for theatre production "The Book Of Space" with tours and residencies in Wales, Cuba, India and Denmark. - Founding member, creative director, assistant pianist and performer with the Citizens of the World Choir, a refugee choir based in London. Performances have included appearances with legendary jazz singer Ian Shaw, at TedX Covent Garden, at Love Supreme Festival, Ronnie Scotts, 606 club, Swiss Ambassador’s Residency, Greenwich Music Time Festival, St Paul’s Cathedral and at the Houses of Parliament. Meg is also currently working as a cello, piano and singing tutor and administrative Manager for the Becky Dell Music Academy – a fast growing teaching academy dedicated to offering students a “fun approach and a unique blend of classical and non-classical tutoring”. The academy, based in Greenwich and Blackheath, has gained testimonials from big names such as Jools Holland and Hugh Laurie. Meg’s personal students have described her as “bubbly, encouraging and can bring out the best in anyone. Her goofiness and kindness makes you feel totally at ease and her love of music is obvious… lessons go by in a blink!”. As a singer/songwriter she also performs her own original material, and has recently released her debut single, “Bramble Arms”, available on iTunes, with another soon to follow. She has been featured on Balcony TV/Discovr TV and performed her original song “Runaway” at Queen Elizabeth Hall, Southbank Centre with a full choir (London Contemporary Voices) as part of a line up including Orlando Weeks (The Maccabees) and RINNGS. She placed 3rd in the Coffee Music Project songwriting contest 2019, has been featured by Discovr TV (formerly Balcony TV) and will be performing at Glastonbury 2019.

I do not offer an iPod/DJ service, I am exclusively a singer and instrumentalist.

I have performed as a vocalist (with London Contemporary Voices and independently) and cellist for artists like Laura Mvula, Charlotte Church, Orlando Weeks (The Maccabees), Marc Almond and many more at major UK venues, festivals and recording studios, live on national television (BBC, The One Show) and radio (BBC Radio 1, BBC London, Virgin, Soho).

Standard Prices
All prices include:A zoom/phone consultation to chat about what you need and I am happy to discuss specific song/music choices!

Theatre B, 3 years ago

We were both captivated immediately, by both her pure, effortless singing and warmth of her voice, and by her emotional but honest delivery.”

Fantastic couple of hours with Meg, she's just too fast. Her vocals are just insane, it just blows me away every time she comes and sings..

As Artistic Director of Earthfall, a touring dance theatre company who work exclusively with live original music, I have had the pleasure of employing Meg Ella on three occasions. In these projects we were working in an educational capacity.   Our first project together she was part of a creative team running a Continuous Professional Development (CPD) intensive course. I utilised all Meg’s talents, her performance skills as singer, cellist and keyboard player as well as her compositional skills which involved creating through improvisation as well as composing a song which I had asked her to prepare in advance using the words from a Dylan Thomas poem. Meg excelled in all areas. She gently led and guided the two other professional musicians whilst still being able to be responsive and flexible with the dancers who were creating their choreography at the same time.   In our second project Meg was tasked with leading a group of teenage musicians on a summer intensive residency. Our creative team was part of a major summer project leading up to a performance at the New Theatre in Cardiff. Meg was tasked with composing and orchestrating 4 contrasting pieces of music to accompany four choreographic works for teenage dancers in 1 week. Again she led gently and firmly, inspiring her young musicians and producing wonderful music utilising all their skills to the maximum.   Given the chance I wouldn’t hesitate to work with Meg again in the future; She is disciplined, reliable, intelligent, multitalented and a pleasure to have around. She has a thirst for knowledge and I am sure she will excel at whatever tasks she needs or wants to learn in the future.

Becky A, 5 years ago

I first met and interviewed Meg on the morning after the General Election in May 2015. The first thing she said to me was, "I'm sorry I'm a bit tired, I stayed up most of the night watching the election coverage." From that first sentence I knew I wanted this fun and socially engaged person to work with me. Meg is an utterly brilliant part of my team, not only an an excellent, intelligent and thought provoking tutor, but by displaying the same social consciousness that she showed me in that first sentence when we first met. Meg teaches a range of students for me, on both piano and singing and many different levels. She also teaches my scholarship students, three wonderful young students who need careful direction and guidance to help work with their AHDH, Tourettes and behavioural problems. All of her students have taken to her and adore her kindness and positivity. Meg has prepared her students for concerts and grades and has achieved excellent results. She is a happy and cheerful member of our team. She is honest, hard working and reliable. I do not hesitate to recommend her in the highest possible terms.

Student testimonial: “Meg is bubbly, encouraging and can bring out the best in anyone. Her goofiness and kindness makes you feel totally at ease and her love of music is obvious and translates into every piece- lessons go by in a blink!” – Anna, student