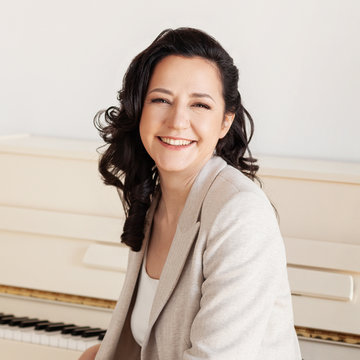 Belarusian Maya Irgalina successfully combines solo and collaborative piano playing. Recently Maya appeared in Batumi Music Festival playing Liszt 2nd Concerto and in Rye Arts Festival with an all Chopin programme. As a soloist she played with such orchestras as City of Birmingham Symphony Orchestra, Manchester Camerata, Belarusian Opera House Orchestra, RNCM Symphony Orchestra, Batumi Symphony Orchestra and others. In 2016 Maya appeared as a soloist, accompanist and chamber musician in the BBC Semyon Bychkov’s Beloved Friend Project about Tchaikovsky. In past years Maya has won many prizes in piano competitions, including Dudley, Sydney, Maria Yudina, Scriabin etc. She is the winner of the RNCM’s highest accolade for solo performance – Gold Medal and had her Wigmore Hall debut in February 2013 as a winner of the Worshipful Company of Musicians auditions. Her playing was broadcasted by ABC (Australia), BBC Radio 3 and Belarusian Radio. In 2015 Belarusian TV made a film about her. Maya is the recent graduate of the International Artist Diploma in solo performance at the Royal Northern College of Music, currently she develops her accompaniment skills under the tutelage of Julius Drake at the Guildhall School of Music and Drama. Her first steps onto the concert platform were made with the guidance of Lilia Ter-Minasian at the Belarusian Academy of Music. Maya has received the scholarship from the Ministry of Culture of Republic of Poland - “Gaude Polonia”and twice became a laureate of a Scholarship Award from the Special Fund of the President of the Republic of Belarus. Alongside with the traditional concert activities Maya is very keen on giving outreach lecture-recitals for schools widening children’s understanding of the classical music.

Maya was fantastic to work with. She was very well presented and a credit to Encore artists She provided a good indication of what could be played at the event, in keeping with it being a party, which was helpful. She was also extremely polite and followed up the next day to wish us well, which was appreciated. We would rebook Thank you

Maya accompanied really senitively, was really supportive and easy to work with. I would highly recommend her.

Everything was fine and went smoothly

Verified
Joseph B, 4 years ago

A very reassuring presence in the exam room for my ATCL piano as page turner - thank you so much!

One of the best pianists we have had at the Halls" . . ."absolutely stunning. What an amazing talent she has.

...I had an absolutely magical and uplifting time at the concert which far surpassed my initial expectations...Maya Irgalina was electric, fusing her pieces with a dark, emotive energy that could be felt with every key that was struck.

A gentle Rachmaninov encore concluded an extremely pleasing recital by a most talented and engaging soloist.

I believe that Maya Irgalina is an outstanding pianistic talent. She has a commanding technique that she harnesses very successfully to a strong musical instinct. She has the potential to achieve an international reputation and career and her impressive list of prizes and awards backs up my opinion of her talent.