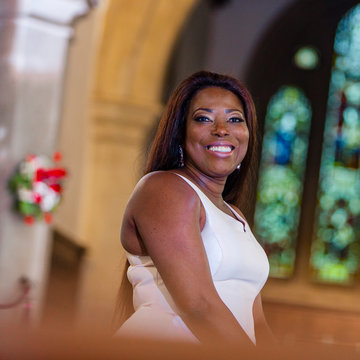 About Maxine is a classically-trained soprano, specialising in classical and other popular music. She has sung with classical and gospel choirs nationally as both ensemble member and lead vocalist; aiming to share joy with others through the gift of song. Biography Born in the UK and educated in Jamaica, she first started singing at the age of 12 at a Pentecostal Church in Heartease, Mandeville. Whilst singing gospel there, she led the children’s choir, church choir and sang with a gospel band called "The Gospel Persuaders Band". She also performed as a soloist at various other venues in Jamaica. Returning to the UK in October 1987, she sang in further ensembles, such as combined choirs and as a lead vocalist with a Pentecostal church choir in Peckham, London for over 16 years. Additionally, she performed as a solo artist at weddings and church functions all over the country. After marrying in December 2003, she revived her singing passion in two local amateur choirs, ‘Music in the Brickhills’ and 'Stewkley Singers' which perform recitals of classical pieces. This was such an enjoyable experience that it inspired her to seek professional training to master the classical genre. She has since performed; Mozart’s ‘Requiem’, Handel’s ‘Messiah’, Rutter’s ‘Gloria’, ‘The Armed Man’ by Karl Jenkins and many other classical pieces. In February 2016, she reprised her favourite piece, Mozart’s ‘Requiem’, this time with one of the best classical choirs in the country, ‘The Hertfordshire Chorus’ conducted by David Temple - who is also the founder of the Crouch End Festival Chorus. This was an amazing and incredible, mind blowing experience. In June came more excitement with a debut at the Tate Modern, singing as part of Tino Sehgal’s ‘This is Propaganda 2002’, which ran until July. This unforgettable experience was pleasantly topped off with a meeting with Tino himself. In February 2017, she performed Andrew Lloyd Webber’s “Pie Jesu” at a birthday celebration in a North London church, seating over 2000. In September 2018, she performed at the Huddersfield Town Hall in Commemorative Event to Celebrate 75 years of the Windrush and the NHS Huddersfield Town. Most recently, Maxine was asked to perform whilst on holiday for Joss Blanchard a professional artist at her exhibition in the Ville de Mougin in the South of France in July 2019. October 2019, Maxine performed at a Village concert to raise money for church(St Mary the Virgin - Great Brickhill) toilet. February - March 2020, Maxine to perform with Aylesbury Opera - Cavalleria Rusticana and Pagliacci at The Court Theatre at Tring · Tring Presently, Maxine aims to share joy with others through the gift of song; fusing her lively, Pentecostal upbringing with classical style and pieces to create a soul-stirring mix of music. Maxine studies opera in London with Håkan Vramsmo, a well known Swedish baritone.

I am always aim to please my client in everyway possible. I am flexiable to enable that my client needs are met at all time.

Yes you can. I am happy for you to suggest other repertoires you like of your choice.

It depends on what is required by the client. I do have my own amplification and microphone if that is not provided. In most cases I do not need a mircophone but really depends on the venue. For exampe for church no but other venues may vary, this I would discuss with the client before hand.

yes! I sing in different languages so i will need plenty of time to prepare for any event. Preferably, 1 - 3 months notice depending on the song and language. English a month at least.

The warmth and presence I give to the audience and the response is so touching. Angel voice is what most of my clients called me.

Windrush Concert at Huddersfield Town Hall on the 29th September 2018 a Commemorative Event to Celebrate 70 Years of the Windrush and the NHS. It was a phenomenal!

Standard Prices
All prices include:3 - 5 songs plus backing tracks and accompaniment.

Verified
Butch B, 1 year ago

Dear Maxine – may I extend a personal “well done” to you who took part in the wee eisteddfod last night – I thought you were absolutely magnificent and the buzz round the audience after the show proved that. Many thanks and congratulations to you – thank you for the music! Very best wishes

"Everytime I heard you sing you just blow me away Maxine. Thanks for singing at the Women's event."

may I extend a personal “well done” to Maxine who took part in the wee eisteddfod last night – I thought you were absolutely magnificent and the buzz round the audience after the show proved that. Many thanks

Thank you again for your magnificent performance at the Town Hall. See you in 2019.