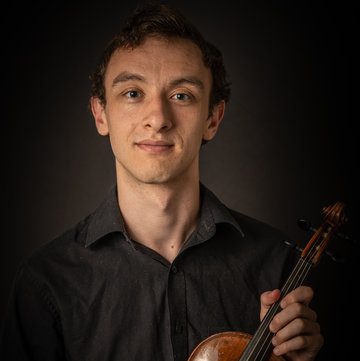 Violinist (with a passion for period performance) and viola player based in London.
3 of 6 photos
Baroque Violinist
London
Public liability insurance of £10 million
Verified profile

British violinist Maxim Del Mar is a recent graudate of the Royal College of Music, London, with a Masters in Historical Violin with Adrian Butterfield, where he was an RCM Scholar supported by a Musicians' Company Lambert Studentship. A music graduate from the University of York, where he began to explore historically-informed performance, Maxim has gone on to specialise in this field, performing a wealth of solo, chamber, and orchestral music spanning from Monteverdi to Beethoven on original set-ups. Chamber music forms a big part of Maxim's musical life, and he is an active member of emerging chamber ensembles including Ensemble Echos, Ensemble La Notte and Endelienta Baroque, with whom he has lead Bach's B minor mass. Recent highlights have included a concert exploring the chamber music of Chevalier St George held in the Queen's Gallery, Buckingham Palace, with an RCM period string quartet. He has performed with many leading period orchestras including the Hanover Band, I Fagiolini, Yorkshire Baroque Soloists, London Handel Orchestra and Players, and Florilegium, and is excited to be on La Serenissima's 'Emerging Artist Chair'

Great musician to work with, friendly and got on very well with my regular players. I hope to work with him again.

Maxim was delightful and fitted in very well with the other singers.

Great musician to work with, friendly and got on very well with my regular players. I hope to work with him again.

Maxim was delightful and fitted in very well