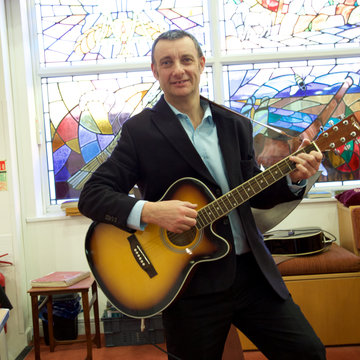 Citizen max – singer/ guitarist North London based with own car and PA CITIZEN MAX is a highly versatile entertainer, whose repertoire includes Rock, Pop, Motown, Soul, Reggae, Folk, Country, and Irish. With over 500 gigs to his credit, he is a natural singer/guitarist who has performed throughout England, UK, Europe and as far afield as Toronto – from restaurants, hotels, clubs, pubs, private functions and parties. Experience: Fronted various bands including :- Carnabeat , 4-piece playing mainly 60’s Beatles, Stones, Kinks, Who, Hollies, Monkees as well as other classics by the Eagles, Bryan Adams, Bruce Springsteen etc Played mainly working men’s clubs, pubs and private parties. The High Jigs English folky outfit featuring accordion, double-bass and percussion/rainstick with me on acoustic guitar and vocals. Occasionally augmented with mandolin and clarinet. Material mainly traditional Morris dancing music and original compositions mixed in with the odd cover by the likes of the Kinks. Played at festivals and in pubs, including residency at the Torrington, North Finchley Trash City Rockers : Rock/Indie guitar band playing Nirvana, Stone Roses, James, The Clash, The Jam, Bob Marley, Oasis, Manic Street Preachers, etc Played the Greater London pub circuit including regular gig at the Trinity in Harrow. The Celtic Tigers: 3-piece that played the London Irish circuit, playing trad stuff + Pogues, U2, Christy Moore as well as Country& Western classics - Glen Campbell, John Denver, Eagles, Emmylou etc. Various duos mainly with lead guitarists or bass players or female vocalists Countless solo gigs with and without backing tracks with me playing acoustic and singing with the occasional splash of harmonica. Has sung literally hundreds of songs and played hundreds of gigs, has a good rapport with the audience and where appropriate gets them involved. Currently booking for 2020/21(Still available for NYE and St Patricks day at moment)

Wonderwall
Daydream Believer
I Fought The Law
Oliver's Army
Obl-adi obl-da
Have A Nice Day
These Days
Price Tag
The Kids Are Alright
Mr. Tambourine Man
Tangled_Up_in_Blue
Feel
Dancing In The Dark
Perfect
Can't Help Falling In Love
Wild Honey
My Ever Changing Moods
Losing My Religion
No Woman No Cry
I Only Wanna Be With You
Love Train
Patience
Friday I’m In Love
Breaking Up Is Hard To Do
Life Is A Rollercoaster
Galway Girl
Somewhere In My Heart
It Must Be Love
Three_Little_Birds
Ever Fallen In Love
Tunnel_of_Love
Move On Up
Your Song
Always On My Mind
Lyin' Eyes
Stand By Me
One
Hello Mary Lou
What A Wonderful World
Town Called Malice
Rockin’ All Over The World
If You Wanna
Stuck in a moment
I’m a Believer
Brown Eyed Girl
I Only Want To Be with You
Something Just Like This
Superheroes
Something’s Gotten Hold Of My Heart
Angels
Don’t Look Back In Anger
Suspicious Minds
Walk away Renee
When You Say Nothing At All
Sit Down
Bye Bye Love
Valerie
Always On My Mind
Rule The World
Let It Be
The Last Time
Always On My Mind + + +. many, many more!!
Customer questions

“Yes, absolutely! I bring my own instrument to play acoustically, but also P.A. with backing tracks as required”

Max has been a regular entertainer at our club's social events for a number of years. With the accompaniment of his guitar Max has been a very popular visitor as he engages our members with a well thought out selection of songs tunefully sung with great enthusiasm and skill. His repertoire is wide and well presented to suit the audience. I have no hesitation in recommending his services. Please contact me with any query. Henry Jacobs Social club events manager

We asked Max to play at our New Year's Eve party at our place and he made it a great evening. Max singing, playing the guitar and animating the evening in a varied way and according to our desires- he even learnt a couple of French songs for us! I strongly recommend

Brilliant gig - really got the audience going from start to finish

That was fantastic - top quality entertainment