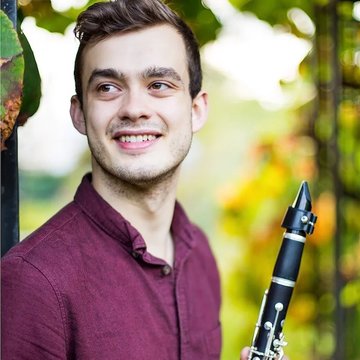 Freelance clarinettist based in London. Graduate of the Royal Academy of Music. Chamber, solo and orchestral musician and educator.

Matthew Wilsher is a chamber, orchestral and solo clarinettist, who graduated from the Royal Academy of Music with distinction in clarinet performance, where he was also a Chamber Music Fellow and Open Academy Fellow. Since graduating, Matthew has been lucky enough to work with such esteemed conductors as Sir Mark Elder, Sir Trevor Pinnock and Manuel Lopez Gomez, and has studied with Sir Andrew Marriner and Christopher Richards of the LSO, and Mark Van der Weil of the Philharmonia. As well as performing and recording with the Philharmonia and the London Sinfonietta in venues such as the Royal Festival hall, Matthew is principal clarinet of both Devon and Dorset Opera, and freelances with many other opera organisations such as ETO, Waterperry Opera and West Green House Opera . As an active member of the wind quintet Moriarty Winds, Matthew has performed at Wigmore Hall and in Wimbledon International Music Festival and Surrey Hills International Music festival.

Matthew B, 5 years ago

Matthew has an excellent technique, with an increasing tonal range and a hunger to develop swiftly. He has a deep interest in music of many sorts, old and new, and is always keen to try something off the beaten track and to uncover new experiences.

Individually, they are some of the most talented woodwind students to have graduated from the Academy in recent years and collectively, they are able to combine these talents with a determination to balance their individual playing careers with their performing schedule as a quintet…...I truly believe they have the potential to become on of the leading wind quintets in the country.