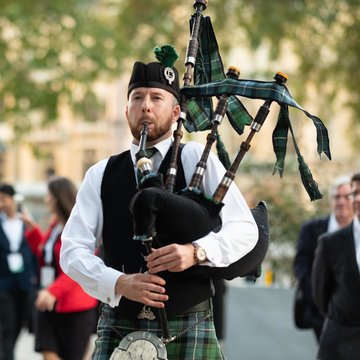 3 of 43 photos
Bagpiper
London
Verified profile
With 24 years' of experience as a professional bagpiper, Matthew is the perfect addition to make your day special and distinct to any other!

Services offered:- Weddings, Corporate, Media, Birthdays, Funerals, Burns' Suppers and Other Events of your choosing. Matthew McRae has been playing the Great Highland Bagpipes since he was 10 years old and through-out his piping career he has played as an individual solo performer at multiple events across a wide range of platforms. He has performed at prestigious venues such as the Royal Albert Hall, Hampton Court Palace, The Intercontinental in Mayfair (Ldn), Saxon Hall, Birkbeck University, Sony Pictures and plays regularly on the Great British Pullman steam train (otherwise known as the 'Orient Express'). Furthermore, Matthew has played for weddings at Horsley Towers, Horsted Place, Leeds Castle, Saddlers Hall, and Burns’ suppers for Panasonic, Mecca Bingo, Grosvenor Casino and Howling Hops Brewery etc. Matthew is an accomplished skilled professional, highly versatile and flexible in his approach. He always works with his clients to ensure that every performance delivers the right impact for the intended audience. Media:- Matthew has appeared on a range of well-known TV and Radio programmes, from Chris Evans’ Breakfast Show on BBC Radio 2 and Absolute Radio, to Made in Chelsea and The Last Leg: Correspondents. He has also featured as a session musician with Right Said Fred and for Walkers Crisps, and has performed with The Chieftains, and the international bestselling classical group, Il Divo. Corporate:- Matthew has worked with a range of leading corporations including Channel 4, BBC One, BBC Radio 2, Absolute Radio, Sony, RadioTimes, Burberry, Walkers, Panasonic, Flybe, Belmond, Marie Curie and many more. Band Involvement:- Matthew has always been closely affiliated with the pipe band fraternity playing with a total of three bands to-date. The first was in 1995 called the Southend Scottish Pipe Band, then after disbanding in 2002 Matthew joined the Sutherland Pipes & Drums based in Corringham, where he has played in many festivals, fetes, military tattoos, remembrance parades and Christmas celebrations. Deciding to progress his piping onto the next level, in 2012 Matthew joined the Essex Caledonian Pipe Band. Being a competition band, Matthew has been competing up and down the country, and internationally since, including the quartets, mini bands and Jim McGuinn memorial contest in Broxbourne, the local Scotland in Colchester Competition, the Cowal Highland Gathering in Dunoon and the Scottish Weekend Competition in Belgium. Past and present results across all competitions have been very positive, picking up 1st, 2nd or 3rd place honours.

He was absolutely brilliant. Would highly recommend

Matthew played at my son's wedding on 1 August 2019 at The Tythe Barn Bicester. He was punctual and his playlist was just what we had asked for. I would recommend Matthew for your wedding or any other event requiring bagpipes. A big thank you Matt for your contribution to what was a truly magical day

Matthew was excellent. Prior to the event he would always reply quickly to messages. During the event he was there right on time and on schedule. He was very talented and everyone enjoyed hearing his music.

It was an amazing day will def recommend encore

We were absolutely thrilled that we chose Matthew as our bagpiper for our wedding in London in November. We wanted to add a Scottish touch to the day, and couldn't have asked for more! His playing was excellent, and he was extremely friendly and professional and happy to accommodate our requests for where and when to play. Lots of the wedding guests said their highlight of the day was being piped along Cheapside - it created a brilliant atmosphere, and we would highly recommend him!

Matthew, thank you for your intrepid playing - again much enjoyed and commented on positively by many of the VIP guests you welcomed so joyfully, and so early in the morning

We booked Matthew to provide music for our graduation ceremony. He played for a short time outside the venue before the event and although it was chilly, he played well and didn’t complain about the cold. Later, he led our academic procession in and out of the graduation ceremony. We had some very specific requirements and he carried them all out beautifully. His standard of performance was very high. His pipes were nicely in tune and sounded much better than other bagpipers I have heard. His contribution made a big impact at our event and lots of people have made positive comments about his playing. I have recommended him to other colleagues already and expect I will probably book him for other events in the future