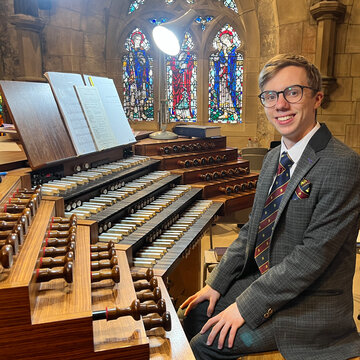 Matthew McIlree is a joint piano and organ scholar at the University of St Andrews. Prior to this, he studied at the Music School of Douglas Academy, after being awarded a place in 2012; and in 2018 he gained a Diploma of The Associated Board of the Royal Schools of Music, with distinction. He has been a multiple prize winner at both the Glasgow and Inverclyde music festivals , including twice winning the Glasgow Society of Organists' Trophy at the Glasgow open organ class; and three times winning the top piano award, as well the 2016 overall prize, in Inverclyde. Matthew has extensive experience playing organ, having played for weddings in several churches in the Glasgow area, and he regularly plays at services in St Salvator's chapel, St Andrews (during term time), and St Colm's, Kilmacolm during the holidays. He has also been played light, jazz, and background piano music for functions at several venues across Scotland, including the Fairmont Hotel, St Andrews, and the Army reserve centre, Glasgow, as well as at carehomes and Day centres. His repertoire is varied, including classical, traditional jazz, and modern film and pop music. His sight-reading ability also allows him to take requests, before or even during a performance.

I'm usually fairly flexible within the same day, and will often be able to do several dates. The earlier you let me know, the better!

I'm afraid this is not something I do - but quiet background piano can work for between bigger sets.

If you have a piano - no time at all! 5-10 seconds perhaps to sit down and get music out. Ideally though it would be good to have 30 minutes to warm up beforehand, and if you need me to set up my own digital piano, up to an hour.

Yes. Even if your piano is out of tune, some styles can work well regardless, for example, ragtime and traditional jazz

Yes, and if you want a piece not on the list, just ask, and I'll usually be able to find it. If it's a complex classical piece I may need to know several weeks in advance.

Ideally an acoustic piano should be at the venue, but in certain circumstances I can bring my own digital piano. I may need to charge extra for the transport costs of this, however.

Yes, absolutely. Just let me know. If it involves collobarating with other musicians (singers etc.), I charge £20 per hour for rehearsal time.

I think people like to hear a good mix of music, and with a background in both classical piano, jazz and the church I have the ability to play a wide variety of styles. My live background piano adds a bit of class to dinners or drinks reception, and people have come up to me at the end of events to tell me how much they enjoyed it.

I love Billy Mayerl, Scott Joplin, Fats Waller and other "Old-Time" jazz musicians. Current pianists I enjoy listening to include Jonny May, Lucas Sestak, Donna Oxford and many other "Youtuber" musicians.

Kelvingrove Art Gallery has been the largest scale performance. It's a very popular venue with more than 1.3 million vistors every year.

Very impressed. Arrived even earlier than expected to prepare. Everyone was impressed by his performance.

Matthew was fantastic, helpful and friendly. I highly recommend him for any kind of booking

Verified
Chris B, 2 years ago

To whom it may concern Matthew McIlree has the unique distinction of holding both organ and piano scholarships at the University of St Andrews. In both capacities he has proved himself to be an adept and capable musician and we have no hesitation in asking him to represent the University as a performer. In this capacity he has undertaken as diverse as (extensive) liturgical organ accompaniment and solo organ performance, as well providing piano music for commercial events at the Fairmont Hotel. He is an excellent pianist and jazz musician and a capable and talented organist. CHRIS BRAGG Head of Programming, University of St Andrews Music Centre

Verified
Major B, 4 years ago

Dear Matthew I write to thank you for providing a musical accompaniment for our 50th Anniversary Dinner on Saturday 1st April. It was a highly successful dinner and clearly enjoyed by all, with many of our guests commenting appreciatively on your playing. Your efforts were particularly noted by our guest of honour [Brigadier D G Hardie, DLL of Dumbartonshire]. Your piano accompaniment selection of tasteful and entertaining music played a key role in this success. It was very clear that you put considerable hard work into your preparation and rehearsals despite the short notice of our request. We are very grateful that you were able to play for us and thank you for your excellent support. Major D G Bertram RA Battery Commander 207 (City of Glasgow) Battery