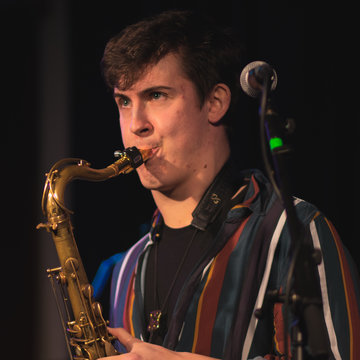 Jazz Tenor Saxophonist available for a variety of events. Primarily performing, but not limited to, jazz. Available as a solo or small band.

A recent graduate from the University of Aberdeen and now studying a Masters in Jazz Performance at the Royal Birmingham Conservatoire Matthew is an active musician performing regularly with a variety of ensembles. Recently, Matthew has had a busy few years having recorded an album with the band Hamlet, receiving joint first place in the Ogston Performance Prize at Aberdeen University and receiving a first class honours in Community Music as well as many performances across the UK. A few notable bands Matthew has performed with include: The Aberdeen Jazz Orchestra, The Royal Birmingham Conservatoire Jazz Orchestra, The University of Aberdeen Symphony Orchestra, Jazz fusion group- Hamlet as well as many solo and duo performances. Matthew plays regularly at the Blue Lamp jazz club in Aberdeen and has performed across the UK, playing in a number of jazz festivals. Matthew recently performed music to the Dutchess of Cornwall on a recent visit to the Aberdeen Airport. He was also involved in a virtual performance for the University of Aberdeen “Extraordinary Burns Supper” in which Iain Glen and The Dutchess of Cornwall were both involved. Now studying under Mike Williams and John O’Gallagher, Matthew continues to develop his sound and approach to improvisation as well as being an active musician on the Scottish and Birmingham scene.

Standard Prices
All prices include:Travel. Time at venue.
NEW!Virtual services
Personalised Music Message
Book me to create a unique music video for you to send to a friend as a gift. This could be a birthday message, first dance song for a wedding anniversary, or just your friend's favourite song to cheer them up.
£15

Tenor Saxophonists in the UK