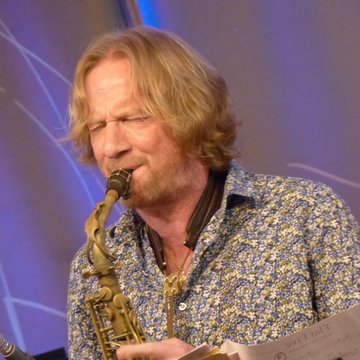 Described by the late John Dankworth as 'an incredibly talented musician and composer', alto sax player Matt Wates was born in London in 1964 and graduated from Berklee College of Music in 1988. He has appeared with Bucky Pizzarelli, John Colianni, Humphrey Lyttelton, Georges Arvanitas, Helen Shapiro, Don Weller, Bobby Wellins, Dusko Goykovich, Duncan Lamont, Ian Shaw, Norma Winstone and Peter King. He has recorded with Paz, Roadside Picnic, Itchy Fingers, NYJO, the Michael Garrick Big Band, Sax Appeal and Jamie Cullum. The Matt Wates Sextet has recorded twelve albums on the Audio-B label. He won the Rising Star award in the 1997 BT British Jazz Awards, and the Matt Wates Sextet won the Best Small Group award in 2001. The trio also features the fantastic guitarist Nigel Price. Over a career spanning more than 25 years, Nigel has become widely acknowledged as one of the hardest working musicians in the business. Musically, his blend of flowing bebop lines, deep blues sensibility and his mastery of chording continue to delight audiences and fellow musicians alike. His career highlights include a support show for Gladys Knight at The Royal Albert Hall and an appearance on Van Morrison’s recent album Keep Me Singing. Starting his professional career in his early 20s, Nigel toured Europe with various reggae and funk bands before settling on a solo guitar career and turning his attention to jazz. Citing early influences as Wes Montgomery, Joe Pass, John McLaughlin and the Mahavishnu Orchestra. Nigel honed his craft by attending gigs and sitting in with the players of the time. He has played on more than 50 albums including 5 as a leader, spent ten years with acid jazz outfit The Filthy Six, was a member of James Taylor’s band for 3 years (with whom he recorded 5 albums) and performed with the legendary David Axelrod. He has also taught at The International Guitar Foundation at King’s Place, London. He has worked tirelessly to organise his own tours (including a 56 date tour in late 2016) and has picked up a Parliamentary Jazz Award (Best Jazz Ensemble, 2010), a nomination for a British Jazz Award (Best Guitarist, 2014) and a British Jazz Award (Best Guitarist, 2016) along the way. Double bassist Julian Bury has played with Sir Paul McCartney and has been seen playing sophisticated jazz on BBC 1’s Holby City. He has appeared on Top of the Pops 2 playing bass with Gilbert O’Sullivan, and is a well respected player, comfortable with everything from be-bop to jazz standards. He appears regularly in jazz clubs in and around London, from Ronnie Scotts to the 100 Club. His highly rhythmic, swinging approach to the instrument ensures that he is always in work.

The Girl from Ipanema
Take Five
Misty
Summertime
God Bless the Child
My Funny Valentine
Have You Met Miss Jones
East of the Sun
Out of Nowhere
The Song is You
Triste
One Note Samba
Black Orpheus
Stella by Starlight
Recordame
Skylark
Old Folks
Polka Dots and Moonbeams
I Fall in Love too Easily
Love for Sale
Easy Living
You'd b So Nice to Come Home Too
Beautiful Love
Yesterdays
All the Things You Are
Just Friends
Just One of Those Things
Body and Soul
Once I had a Secret Love
Lover Come Back to Me
Wave
Meditation
The Shadow of Your Smile
S'Wonderful
Blue Moon
Fly Me to the Moon
There will Never be Another You
Emily
Nostalgia in Times Square
Straight No Chaser
Bluesette
Some Day My Prince Will Come
The Way You Look Tonight
I Love You
I Can't Get Started
The Days of Wine and Roses
I'm Old Fashioned
Alone Together
I Thought About You
Time After Time
In a Mellow Tone
Poor Butterfly
Don't Get Around Much Anymore
Things Ain't What They Used to Be
If I Were a Bell
But Not For Me
It's You or No-One
The End of a Love Affair
But Beautiful
Do You Know What it Means to Miss New Orleans?
Poinciana
Nica's Dream
Corcovado
Customer questions

Yes, we go out as a duo (sax and guitar or sax and piano) as well as a trio. We also go out as a piano trio (sax, piano, bass).

We aim to be as flexible as possible, given sufficient notice!

Yes, for no extra charge.

No more than half an hour, but we usually arrive about an hour ahead of time.

We're definitely happy to chat through and make sure we find what works for your event.

We don't use a PA. We require a space of about six foot square to perform and access to an electrical powerpoint.

Yes, up to a maximum of three. But we charge £30 extra per song.

We create a chilled, relaxing vibe.

Matt has played with Wet Wet Wet, and his six-piece band has opened for US close-harmony group Take 6. Nigel has played the Glastonbury Festival several times. Julian has played with Sir Paul McCartney.

Absolutely loved Matt and the Trio. They were attuned to the audience, added to a magical wedding, perfectly complemented the wedding ceremony and reception. The quality of their playing and engagement was everything we hoped for and more. Can't wait to have another party where I can hire them!

Verified
Timothy B, 1 year ago

Amazing evening. Everyone so loved the music.

Matt played at our son's 21st. He is a fantastic musician and so nice to deal with. He and his colleagues turned up in good time, dressed beautifully in black tie, judged the mood perfectly and fitted in so well with the situation. Matt is a delight to deal with and we would definitely recommend him and use him again.

Matt and Nigel played at our cigar and rum tasting during the Rye Jazz Festival last year. Amazing!! Their music filled the outdoor space and added perfectly to the atmosphere of relaxed, Latin fun that we hoped for. Matt played my favourite "Girl from Ipanema"...which can be so cheesy, but he played with sensitivity and depth of feeling. A real goosebump moment! I cannot recommend these musicians highly enough.

Verified
Ken B, 2 years ago

“Matt played at my 70th birthday party last year to a fantastic reception.Together with his fellow extremely talented musicians they helped create a relaxed and welcoming atmosphere. I ,as having worked in the music industry for many years have no hesitation in recommending his and their talent for any function.”

Matt Wates and colleagues trio turned out to play at a summer luncheon party which spilled out onto the lawn; they were terrific and captivated our group of friends, many of whom are professional classical musicians. Matt captured the atmosphere of the event to a T and we were treated to some astonishingly good music making, definitely plan to get him back again soon and thoroughly recommend him. Nigel Press.

`Not just three incomparable jazz instrumentalists; this is one of the finest jazz trios in the business, capable of exploring any nook and cranny of the jazz lexicon. Book a taxi, jazz played played like this could make you miss the last bus home!¨

Matt was recommended by our caterers to play at a summer garden party we held. He brought along a guitarist and they played great music appropriate to the time of day and occasion. We had a lot of positive feedback from our guests. We highly recommend him.