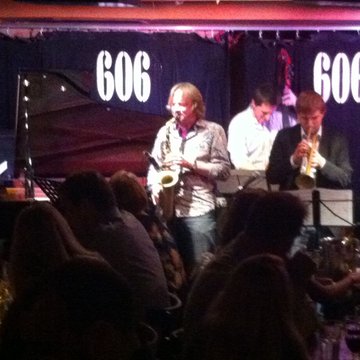 I've been running this band for about twelve years now. The combination of two saxes, trumpet and rhythm section is a fairly classic one in jazz and has appeared many times in the last fifty odd years. It creates a lot of possibilities for an arranger/composer. As a writer, I am basically trying to come up with material that will be fun to play, and to create a strong mood that will communicate itself well to an audience, perhaps even a non-jazz audience. I feel my best compositions are the ones that create and sustain a mood well. If you're going to have a band, it seems to me you've got to have original material, otherwise you just end up sounding like a lot of other groups. I also feel it's important to keep adding to the repertoire so that it doesn't get stale. I therefore feel obliged to try to keep coming up with new pieces to play. About eighty percent of our repertoire is original, and the rest consists of "standards" from the great American songbook which I have arranged for the band. The great standards have a timeless quality although I hope that our interpretations sound fresh and up-to-date. In style, the sextet certainly resembles many of the great small bands of the 50s and 60s, such as those of Horace Silver and Art Blakey. We take inspiration from the past, but we are not trying to replicate it, merely to add in a small way to the music for which we have the deepest respect and love. I strongly believe that jazz has to swing. To me, this is what gives the music that beautiful human quality which attracted most of us to jazz in the first place. We play some Latin American style pieces and some funky things too, but the heart and soul of the band will always be straight-ahead swing. If it isn't swinging at least some of the time, I really don't feel it's jazz. I'm also trying to avoid some of the egotism that has beset the music since the 60s. I want a band that sounds like a band, not just a collection of soloists, and so we tend to keep the improvised solos fairly short, and punctuated with backing riffs. After all these years, the band is certainly sounding pretty tight. In general, I am trying to put back into the music some of the things that I feel have got lost over the years : melody, swing, and the idea that a band should not be just a battleground of egos. Above all, I maintain that jazz should be fun to listen to as well as to perform.

Victoria
Gin and Bitters
Hill Street
The Seer
Coasting
How High is the Sky?
Heatwave
Yemanja
When We Grow Up
In Other Words
Mojito
After Hours
One in Five
Wildfire
Para la Nina
Beatriz
The People Tree
What Good is Spring?
On the Up
Blood Diamond
There it Was Gone
NoWay Back
People Will Talk
Just Add Water
NightTime
Time Will Tell

The future of jazz is safe with guys like this around

A seriously good band containing six of Britain's finest jazz musicians, regardless of age or style

Jazz bands in the UK