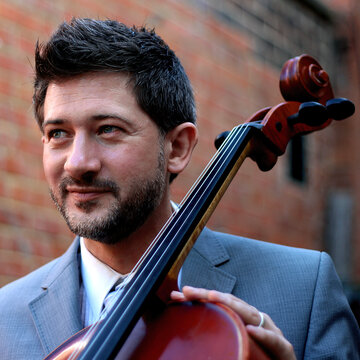 An innovative, internationally performing cellist who has played at events of all sizes and for artists across many genres.
3 of 8 photos
Cellist
Addlestone
Public liability insurance of £10 million

With my cello in hand, I can evoke the perfect atmosphere for your event. Whether you are looking for background music at a reception dinner, music to accompany a corporate event, or music to walk down the aisle to, I can have you covered with my cello adding its warm emotional tone to your occasion, aiding in creating an unforgettable memory. I can perform solo and totally acoustic mixing up traditional classical pieces with well-known songs arranged for solo cello. The music can be tailored to your event and any music that is requested specifically can be arranged for the day. I am a cellist based in Surrey who has had a very varied career crossing many musical boundaries. From premiering a work by Sir John Tavener as part of the BBC Proms season to performing on the G stage at Glastonbury festival to London Jazz Festival at The Barbican, he has worked with a broad range of artists and composers across the musical spectrum. Highlights include co-writing and performing a re-scoring of the classic 1957 film Mother India with DJ Tigerstyle in venues including Sydney Opera House, Prospect Park in NYC, The Queen Elizabeth Hall and Esplanade Park in Singapore ('We think the cinematic experience of the summer has to be Mother India 21st Century Remix', The Telegraph, 'A powerful and moving glimpse of a challenging, unwieldy masterpiece', The Guardian), and performing cello on TV dramas that include Channel 4's Humans for composer Sarah Warne, Sky's The Five for composer Mike Jennings and Doctor Who for composer Segun Akinola. I am an active recording session player who has also recorded for films, documentaries, adverts and AAA games such as Apex Legends for EA and the Total War Series for Creative Assembly. Film and media composers I have recorded for include Henry Lai, Ian Honeyman, Ian Livingstone, James O'Connell, Jerome Leroy, Michael Maidment, Mike Jennings, Peter Linn, Philip Guyler, Romain Paillot, Stephen Barton, Sarah Warne and Segun Akinola. I have also recorded and performed for artists including Suzerain, DJ Tigerstyle, Nathan 'Flutebox' Lee, Kool G Rap, Drugstore, and most recently Amy True and Hazel Iris.

Currently, Olafur Arnalds is my biggest influence, it is a constantly changing variable

It would be between performing cello solos for the most recent season of Doctor Who, supporting Franz Ferdinand at the NRJ festival Munich to 12,000 people or performing at Sydney Opera House.

The line-up is very simple - me, my cello and a chair.

This is rarely a problem if there is a slight alteration in timings. Day changes can be more problematic. Please let me know as soon as timings are changed.

I only need 10 minutes to set up but like to be set up at least 20 minutes prior to performance.

Yes. I even bring my own chair.

Certainly. This is a regular request.
Matt

We originally booked Matt for our reception drinks, however, we had to downsize very last minute due to my husband and I catching covid. Matt was very accommodating and self-sufficient which was amazing during a really stressful time. He agreed to play outside at our distanced ceremony and really contributed to the overall atmosphere. Thoroughly recommend!

Thanks for the lovely review Hannah. Congratulations and Best wishes for the future!

Matt was absolutely incredible and completely made our ceremony.

Working with Matt from the outset on our MI21 production has been an absolute pleasure. With Matt’s detail to attention and passion for absolute perfection results in an exceptional collaboration.

I have had the privilege of working with Matt on various projects, as Cellist, Strings arranger and programmer. He is always my first choice in those roles with creativity, patience and professionalism in all the projects he is involved with. I highly recommend Matt as a musician and source of inspiration though his work.