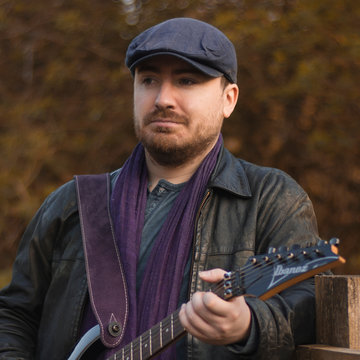 Marshland Pete is an accomplished guitarist and vocalist. Growing up next to the marshland of England (He also grew up next to a golf course but Golf Course Pete doesn't have the same ring to it). He grew his musical understanding from the family 45s, favouring those Rock and Blues artists who could launch into deeply moving guitar solos (Jeff Beck, Cream, Roy Buchanan, Robin Trower, Jimi Hendrix, Free, Led Zeppelin) as well as musicians who embraced the unconventional. In early bands, Petey would take a lead in writing new songs and developing long solos (His other band mates were less impressed with the length of these solos). Petey left the peaceful idyllic landscapes of the East Anglian marshland to travel the long dusty lonesome road (Well alright he took the train, which was quite comfortable) to London. He found a new home in London. Much of his music has been influenced by the London 1960's music scene and living amongst the landmarks of that era has been inspiring. These days, Petey is playing music further afield and has performed in numerous places throughout the UK. Whilst Petey has done session work at prestigious recordings studios such as Abbey Road Studios, he records mostly from his own home studio, Chime Tone Studio. In addition to performing on the records (often playing or programming all of the instruments), he mixes, masters and even does the artwork for his songs. Marshland Pete performs solo as well as in a trio. The trio may not be available for all events depending on location and if costs are met, so please check for availability. The solo set sound can be bolstered by a backing track for the sound of a full band or played with no backing and stripped back to its raw elements. The live set can be tailored to fit the occasion with a flexible setlist. His live solo performance adds a new dimension by adding live looping and improvisation to create a full dynamic sound. Think Royal Blood, Cream and Jeff Beck mixed together in a solo act.

Verified
Laura B, 2 years ago

My dream has been to cross the pond from the States, to form a band in London. Pete not only helped me accomplish this goal in concert but also joined me in recording my single “Relish the Romance,” at Abbey Road Studios on Valentine’s Day. What makes Pete remarkable is his attention to detail and his genuine passion for music. He is not only an amazing guitarist but also a man of many other talents. He accompanied me at the studio beyond his allotted session and made sure all aspects of the song ran smoothly. He even helped me with technical elements and final touches of the album cover. Anyone who is lucky enough to work with Pete will appreciate his loyalty, virtuosity and professionalism. He is both a gifted artist and a superb colleague. I highly recommend Pete Anderson for employment.

As the founder and co-host of the Riff Taff Music Networking Group it is a pleasure to write a testimonial for Marshland Pete. In September 2017 we did a weekend of fundraising events for the Greyhound Trust called Sounds 4 Hounds. I was delighted when Pete agreed to play the show that took place at Bar 42 in Worthing, having seen him in action at the Amersham Arms, South London about a year or so before. The event went exceptionally well over three days and Pete's performance was one of the highlights of the weekend. He really is a captivating guitarist and singer, that had the audience enthralled from the start to finish of his set.