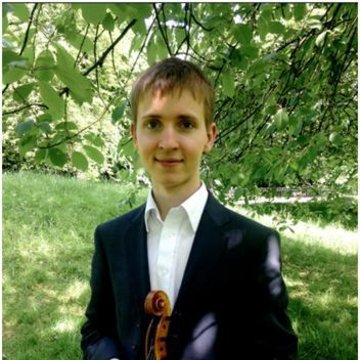 Mark studied viola and piano at the Royal College of Music Junior Department before completing his bachelor’s degree at the Royal College of Music with Jonathan Barritt and Kathron Sturrock. Following a successful application, Mark studied with Czech violist Jan Peruška at the Academy of Performing Arts in Prague for six months as part of his undergraduate degree. Mark was commended for his performances in the 2011 and 2013 Royal College of Music viola competitions. Mark is a keen chamber musician and has performed recitals throughout London and the South East. He has performed numerous concertos, including Telemann’s Viola Concerto with Solistes de Musique Ancienne and Mozart’s Sinfonia Concertante with Ensemble Lunaire. Mark is a enthusiastic teacher and has many viola and piano pupils throughout the capital. Mark has played principal viola with many orchestras, including the Young Musician’s Symphony Orchestra, London Firebird Orchestra, the London Beethoven Project and Orchestra Vitae, performing at venues including the Royal Albert Hall, Royal Festival Hall, Barbican Centre, Birmingham Symphony Hall, Queen Elizabeth Hall, St Martin-in-the-Fields and LSO St Lukes. Mark was recently offered a position in the Macao Orchestra in China, working with them in September and October 2014, and has played with the City of Birmingham Symphony Orchestra, London Concert Orchestra and Mozart Festival Orchestra. He was a member of Southbank Sinfonia 2015 and regularly performs with the pit orchestra in Phantom of the Opera at Her Majesty's Theatre, London.

Really friendly guy, easy to get on with and great player. Will work with him again.

We booked Mark to perform in our Peterborough Sings! concert and were delighted by his playing. The whole orchestra sounded fantastic, and we wouldn't hesitate to book Mark again.