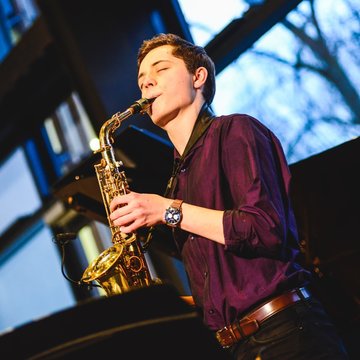 Originally from Scarbrough, Yorkshire, 24 year old Mark Fortnum studied in Cardiff at the Royal Welsh College of Music and Drama, graduating with 1st class honours from the BMus Jazz course under the tuition of Geoff Simkins, Alex Merritt, Iain Ballamy, Steve Waterman, Huw Warren and Nick Weldon. He has performed across the UK and Europe as a member of various musical projects including; jazz groups of differing sizes, riot-jazz brass band Bass12, as a session player with Jack Mac's Funk Pack and other funk/soul/pop and theatre bands, as well as being a solo performer for weddings and functions. Performance highlights include London Jazz Festival, Amsterdam Blue Note, St Davids Hall Cardiff, Greenman Festival and Prague Quadrennial Festival, as well as performing for Shirley Bassey and supporting Hot 8 Brass Band. He has made TV appearances on S4C's Band Cymru competition, BBC Wales Today and with Bass12 as the Cardiff Blues resident band on BBC, S4C and SkySports. Mark has achieved the ABRSM Diploma both in Performance Saxophone and Instrumental Teaching but is also a versatile multi-instrumentalist, his ability to play all saxophones, clarinet, flute and bass guitar leading to theatre performances including; Carousel, Pirates of Penzance, Me and My Girl and Little Shop of Horrors to name a few.  As well as performing Mark also enjoys arranging music for big band and has a role in education, leading workshops and teaching 1:1 lessons.

If timings change slightly in the run up to the event just let me know and we can discuss if this affects the fee.

A very nice sound...the makings of a very good player!

'You were immense, your performance made the ceremony truly memorable, thank you so much!'

Couldn't recommend Bass 12 any more! Their performance was full of energy and really got everyone dancing. They were also very quick at replying to messages when organising the event and were punctual for set up, thanks for a great evening guys!

Thanks so much for your performance yesterday! You were great and that everyone loved it!