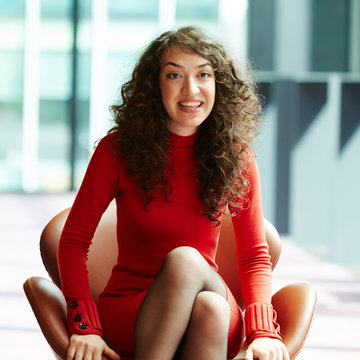 Check availability and get a free quote now - no commitment to book
From£180
Watch & Listen
About Maria
Reviews
Home page
Maria Papathanasiou
Like Maria?
Watch & Listen
1-3 of 9 videos
Recorder Performance of "Aksion Esti" (Theodorakis/Elytis), EAS 2017 Conference in Mozarteum
O son of Justice in the mind (performing with recorder)
J.S. Bach-Cantata no 140-Oboe Solo

I am a very passionate and enthusiastic performer, truly engaged with everything I am performing!
Oboist
London
Public liability insurance of £10 million
Verified profile

Maria has always been passionate about the oboe and the recorder. She first fell in love with the magical relationship between the air and the wooden instrument, which becomes alive through the process of breathing when she was only 5 years old. At the age of 12 she was enchanted by the sound of the oboe. After graduating with a degree in baroque recorder (under Mihalis Kzounias), Maria pursued studies on the Bachelor of Music Degree programme at the University of Macedonia, Department of Music Science & Art. She graduated with high honours and a first class BMus Degree in oboe performance (under Kostis Hassiotis) and pedagogy (under Polyvios Androutsos). She was subsequently offered the position of Oboe Professor and Woodwind Tutor at the State Music School of Thessaloniki for two years. Upon audition, She was accepted as a scholar (The Edward Selwyn Memorial Fund) at the Guildhall School of Music & Drama in London. She graduated with a Masters of Performance in Orchestral Training of Oboe in association with the London Symphony Orchestra with a first class distinction under Steve Hudson, Nicholas Daniel, Gordon Hunt and Jane Marshall. Maria has performed with the London Symphony Orchestra, in projects with the Philarmonia Orchestra and the BBC Symphony Orchestra, the Guildhall Symphony Orchestra, the State Symphony Youth Orchestra of Thessaloniki, as well with many others in UK and Greece. She has attended masterclasses with Thomas Indermuhle, Lucas Macias Navarro, Domenico Orlando, Ian Hardwick, Nora Cismondi, Kiss Josef, Helena Gaunt, Spyros Kontos and George Hadjinikos. She has also studied Alexander Technique with Professor Christos Noulis. During her Master’s Degree, in addition to her devotion to orchestral performing, she developed a great interest in oboe and winds pedagogy: instrumental teaching and orchestral coaching of woodwinds. She did a thorough research on this subject using different learning styles to enhance and develop her teaching skills. She applied her research methods in plenty of outreach projects, most of them working with the LSO Discovery. In her private teaching she applies all these methods and she creates an inspiring and full of variety lesson particularly for each student focusing on his/her personality learning style. Maria is currently the Woodwind Leader of Sistema of England and the Woodwind Leader of Sistema of Europe 2018 and she also works as a freelance oboist, music educator and oboe and recorder teacher.

Maria is friendly and enthusiastic and gained much from collaborating in demanding repertoire.