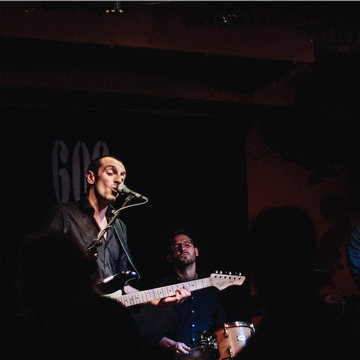 About Marco & The Freedivers

The Marco Piccioni Trio blends the warm sound of Blues Rock with the Contemporary European Jazz flavours. Original songs and instrumentals drift through fast swing ostinatos, free improvisations, psychedelic shuffles and lazy, melancholic 12bar cycles. Marco Piccioni He has worked as a side man and leader since 2003, in New York, Italy and UK. As a solo artist, he has recorded two albums, “Waterflight”, published by DDE-Records in 2005, and “Far” published independently in 2015. Marco has collaborated with various UK artists, including Julia Biel, Cleveland Watkiss, Lekan Babalola & Kate Luxmoore. Parallel to leading his Trio with Blendi Dhami and Chris Nickolls, Marco is also part of the Modal Contemporary band Collocutor by Tamar Osborn, and the Dele Sosimi Afrobeat Orchestra. Lydian Blendi Dhami Lydian Blendi Dhami began the study on his first instrument, the cello, at age of 6. He switched to upright bass at age of 12, since then his educational journey led him to a Degree in Jazz Performance from the Phillipos Nakas Conservatory in Greece, and a Bachelor’s Degree in performance and the award of the ”Outstanding Performer” at Berklee College of Music in 2005. In Greece, Albania, United States and the UK Lydian has been in demand, supporting a great number of significant artists. He has performed internationally in Festivals, tours, and worked for television, radio and studios, playing in a variety of styles. Chris Nickolls Chris Nickolls started playing the drums at the age of 15 influenced by Rock, Funk and Soul music. He moved to London in 2001 and started to listen to Jazz and World music. Since graduating from the London College of Music in 2004 he has had the fortune to perform and record with Frank Sinatra Jr, Randy Brecker, Mike Stern, Andy Sheppard, Jason Rebello and Clare Martin, to name a few. He has performed at many of the top venues in the UK including The Royal Albert Hall, Queen Elizabeth Hall and Ronnie Scott’s, as well as many clubs and festivals throughout the world. Chris also composes, records and produces music from his studio. Some of his work has been featured on TV and online as well as on albums with various artists.

Instrumental:
All blues
All of you
All of me
All the things you are
Autumn leaves
Billy's bounce
Black orpheus
Blue bossa
Blue in green
Blues for alice
Body and soul
Caravan
Cantaloupe island
Chicken
Cottontail
Days of wine and roses
Dolphin dance
Fee fi Fo Fum
Footprints
Giant steps
God bless the child
Green dolphin street
Have you met miss jones
In your own sweet way
Infant eyes
Ju ju
Just friends
Mack the knife
Mercy Mercy
My romance
Nefertiti
Oleo
Out of nowhere
‘Round midnight
Recordame
Show type tune
Softly as in a morning sunrise
Srapple from the apple
Solar
Someday my prince will come
Song for my father
Stella by starlight
St Thomas
Take the "a" train
There is no greater love
There will never be another you
Very early
Waltz for Debby
Well you needn't
Gnoissence #4
Sung tunes:
Beautiful morning
Wonderful world
Moonriver
Over the rainbow
Georgia
Everyday I have the Blues
Third degree
Reconsider Baby
Nodoby loves you when you’re down and out
Good Thing
I just want to make love to you
I ain’t got nothing but the blues
Smack dub in the middle
Before you accuse me
Someday baby
Hard times
Tired of talkin’
Somewhere (west side story)
Going down slow
Fantastic that’s you
Don’t let the sun catch you crying
Blues-Rock-Pop
Free
Probably me
Miss you
Little wing
Hungry Heart
Everybody’s got to learn somethimes
Layla
Hey Joe
Knockin’ on heaven’s door
Like a rolling stone
Born under a bad sign
Tore down
Fire
Hoochie coochie man
Thank you lord
Hard to handle
Third stone from the sun
Thank you Lord
I shot the sheriff
Gimme shelter
Start me up
Cocaine

Marco Piccioni...a force to be reckoned with