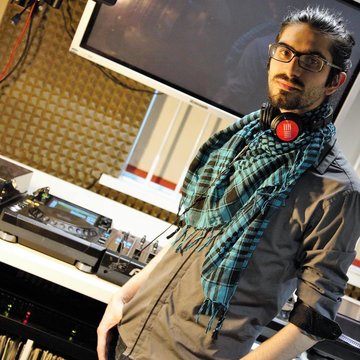 So, my story starts at the age of 8, if I don't remember wrong. I started studying guitar and solfège. I have followed the courses for 4 years, then the rebel inside me decided that my teacher was teaching me wrong (the reality was that I wanted to play live more and study less.). For 3 more years I kept studying by myself, playing live with my band (''The Untitled'', we were playing punk rock music). After this five years, my inside artist exploded. My will of rise my knowledge on music raised at the point that I started studying drums and electric bass. In the meantime my mother, who was a really good singer in the past, started training me in singing. I've been in this situation for 5 years. Need to say, during this period I was hating electronic music, I was a pure ''metallaro'' (the italian version of a metalhead.... you know, dressed in black, spikes everywhere...). My first approach towards the electronic music was the first time I went to the disco. During that night I remember that I though: ''Why all this people like this music? Why does my body want to dance?''. Some months later, my curiosity for these two questions raised up, so I started studying electronic music, how it works, how it is produced... Soon after, I bought a launchpad and started to play on Ableton. I literally fell in love. You know? Music is freedom... in all of 3 axis, or at least this is what I think... I remember that when I was playing as a solo guitarist in one of my ex group (“Onion Lake'n Palmer”, we were playing funk, rock'n roll and blues), the freedom I was feeling was immense... now take this freedom and amplify it 10 times. This is what electronic music gives me. You can forge sounds from the primary source, till the last bit. A year passed from my first approach to electronic music, I bought a Novation Mininova, an extremely compact and powerful synth, and started to play on it. Meanwhile, I started djing with a staff that was rising up in my local disco, ''Supersonic music arena''. In september 2015 a new challenge started: I had the possibility to come here in Manchester, so I started to get a life by myself looking for more opportunities. I found an house and a job, but it wasn’t enough...I needed to do something more with my music, to reach an higher level. I realized music was the thing I want to live on. And soon after I heard about MMS (Manchester Midi School), a place where you study subjects like music production, djing, audio engineering. It was not only exactly what I was looking for, but also the best way to start a proper career in the music industry, so I enrolled immediately. Thanks to my experience and to what I’ve learnt and I keep learning, the way that I planned for myself is finally taking off.

A new, rare and creative way of DJing, he is not just mixing two tracks, he's playing tracks like an instrument!

He is able to mix classical music with his electronica, remastering old sounds into new vintage ones

DJs in the UK
DJs in Salford
DJs in Greater Manchester
DJs in Stockport
DJs in Oldham
DJs in Bury
Customer Service
Discover
Company
As seen on
© Encore Technologies, Ltd.
Crafted with bagels and in London