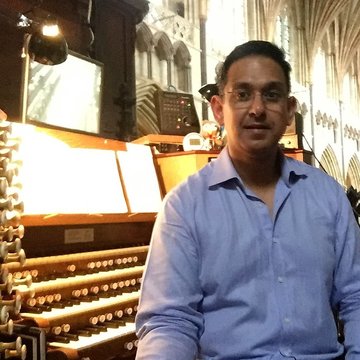 MARC was born and educated in Cape Town South Africa and moved to the United Kingdom in May 2010 to take up the post of Director of Music at St. Botolph’s Church (The Stump), Boston and was subsequently appointed Director of Music of Peterborough Opera and has conducted both Peterborough Symphony Orchestra and Peterborough Gilbert and Sullivan Society. Marc is Director of Music and Master of the Choir School of St Mary the Virgin, Bury Parish Church, Director of Music of Southport Bach Choir and Conductor of the Rawstorne Singers, and conductor of Chester St Cecilia Singers until 2019. In 2019 he completed an MA in Performance Practice at the University of York, and is currently a PhD candidate at York. He has worked several Choral societies, namely Boston Choral Society, Sleaford Choral Society and South Holland Singers and Boston Music Theatre group, winning several NODA awards. He has also accompanied  Lesley Garrett and Aled Jones at Boston Stump. Marc studied piano and organ at the University of Cape Town’s College of Music and was a winner of the Leslie Arnold Award and the Metropolitan Methodist Church Organ Prize.  He holds several teaching and performing qualifications the University of South Africa, Trinity College of Music, London and the Royal College of Organists. Marc holds both the Associate and Choral Directing Diplomas of the RCO. Besides having held major church positions throughout his adult life, he has spent close to ten years working on the South African Schools Choral Eisteddfod, which is one of the school enrichment programmes co-ordinated by the Department of Education to promote choral singing as a national identity. This programme is regarded as a means for social transformation and cohesion among school-going youth. Part of this period he was Assistant and Acting Chorus Master of Cape Town Opera (CTO).  Previously he taught in its Choral Training Programme, established for talented but disadvantaged young singers in the nearby townships. Even though he was on the staff of CTO for a brief while, he was often invited back to work with the chorus and act as répétiteur and accompanist, including their 2006 best-selling CD of Opera Choruses and their concert tours of Sweden and Central Africa. Marc presently continues to occasionally engage with Professor Alison Pearce (previously head of singing at The Royal Academy of Music), in the delivery of singing master classes. Previous masterclasses have been in Cascio, Italy, Stapleford Granary, Cambridge Summer School, Grimsby and annual classes in Boston and is now preparing for a similar weeklong Course at Jesus College Cambridge in 2017. In 2001, he formed the Magnificats Chamber Choir in Cape Town and performed to great acclaim in the city and future afield. Besides their busy concert schedule, they often sang at services (mostly Viennese Masses) at St George’s (Anglican) Cathedral and St Mary’s Cathedrals in the city. This choir was formed to explore the vast repertoire of unaccompanied choral music from the fifteen century to the present day. He has collaborated with several groups and people on various projects using the resources of various choirs and musicians including preparing St Botolphs’ Singers in a programme of music by Patrick Hawes and conducted by the composer. The choirs of Boston Stump have recorded several Christmas Day Carol Services of BBC Radio Lincolnshire under Marc’s direction. As an organist, he has given recitals and played in concerts throughout South Africa, Germany, Sweden, and the UK.

Standard Prices
Packages
Wedding ceremony
This includes music before the service begins, music during the signing of the register, and music as guests leave.
£180

Thank you for making yesterday such a memorable Service. The organ added an extra, beautiful dimension to how everyone will remember Jonathan. We are all very grateful for you giving up your time. Best wishes Richard

Many, many thanks for all your expertise, hard work and support - your experience and willingness to share it made the whole week possible for me and was appreciated by all. Just hope your patience wasn’t tested too often! Geraldine