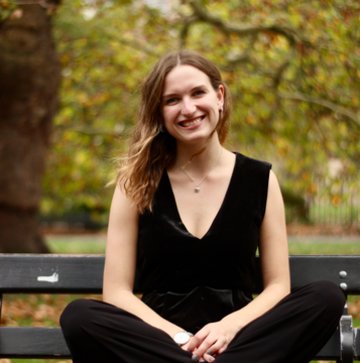 I studied Music at Christ's College, Cambridge and continued to study for an MPhil, singing with the choirs of Christ's and Gonville and Caius colleges amongst numerous other ensembles such as Quinto, Cadenza and the university Opera society. I now work as a freelance soprano studying with Julie Kennard, and singing at St Martin-in-the-Fields alongside other professional engagements. I was a member of Genesis Sixteen 17-18 and I was soprano 2 section leader with NYCGB from 2015-2016. I regularly take solo work, and have performed Bach's Magnificat, Handel's Messiah and many other works. I am also a Grade 8 clarinettist and play in small orchestras and chamber groups. I have Grade 8 piano, and teach piano, clarinet and music theory to all ages.

I try to be as flexible as I can as I understand events change all the time - just let me know of any changes and I will do my best to accommodate things!

This isn't something I can provide I am afraid.

Usually I ask for an hour to arrive and get to know the space, run through the performance, and meet the client. Am very happy to be flexible if shorter or longer is better for you, though.

Yes - the pieces I list I know well, so can sing them if you choose one you particularly like. If they don't quite match what you're after, though, let me know - I can find a mixture of genres to suit you.

Unless we need an organ/piano, which would need to be in the venue, I bring everything with me.

There is a chance I might know it, but if I don't it is usually possible to learn something new provided I have enough notice! Just get in touch and let me know - I normally charge an extra £20 for this, to ensure I have time to get the piece up to a high standard.

PS
Pippa S
3 years ago, for a Church service in Trafalgar Square

Maisie sang as part of the St Martin in the Fields Choral Scholars for a beautiful service.

CC
Christ's C
5 years ago, for a Recording session in Cambridge CB3 9ET

Those words of Fletcher’s crop up again as the last of the four sections of Kenneth Leighton’s Crucifixus pro nobis. This is an ambitious choice by David Rowland because the music is austere and uncompromising, making serious demands on the performers. The soloist is particularly challenged by Leighton. Here, the mantle is taken by soprano Maisie Hulbert who has the first movement all to herself (with organ accompaniment) and reappears in the third movement. She sings very well in the first movement, ‘Christ in the cradle’; I like the tonal quality she produces, even if the words aren’t always clearly enunciated. She seems to me to put over the sadness in the music. Miss Hulbert also does well in the third movement, ‘Christ in his passion’, of which she and the choir give a powerful performance. In between these movements comes ‘Christ in the garden’ which is for choir and organ. The music is intense and dramatic and David Rowland gets his choir to project it strongly. The consonance and relative simplicity of the music in the final movement, the only one that is unaccompanied, provides a pleasing and consoling contrast to what has gone before. Here, Leighton sets ’Drop, drop, slow tears’, as Walton did, but adds a third stanza.