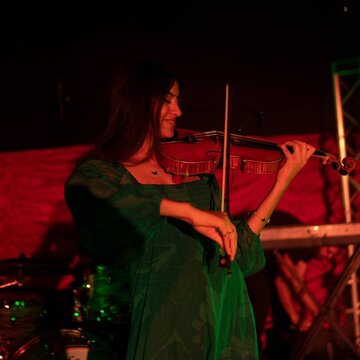 Violinist and Violist based in London and Oxford offering affordable services.
3 of 10 photos
Violinist
London

Maanya Patel is a violinist from West London. Having started the violin age 4, she made her first orchestral debut at just 7 years old leading the Musicale Junior Orchestra, and went on to lead the Ealing Youth Orchestra at 15 which toured Europe with her most notable performance of Scheherazade in 2018. That year she was also appointed Principal Viola of the LSSO, playing under the baton of the likes of Peter Ash and Richard Farnes, in the very prestigious Barbican hall. She has been fortunate enough to be part of the London Philharmonic orchestra’s family, having been selected from hundreds of applicants to be an LPO junior artist in 2018/19, giving her many opportunities to perform with the LPO in the Royal Festival Hall. Maanya has also been a member of some national and international orchestras, playing in the National Childrens’ Chamber Orchestra (NCCO) and leading the European Youth Sinfonia in 2018 at the European Youth Summer Music School with pupils from all over Europe, Hong Kong and the USA. In April 2019 she performed Mozart’s 3rd Violin Concerto with the Berkeley Ensemble and was later awarded The AHA International Music Scholarship to study in Florence and attend the New Generation Festival which is where she was eventually scouted. Her final live recital before the pandemic of Shostakovich’s Piano trio No.2 in E minor gained the highest marks attainable in the Cambridge Pre-U, but in spite of the lack of live performances this year she made a number of tv appearances with Chineke! Junior Orchestra in the Britains Got Talent Semi-Finals and Blue Peter. She is currently filming for Netflix’s “Bridgerton” Series 2 playing viola, which will premier in 2022. Maanya has been fortunate enough to perform in many prestigious concert venues, including The Royal Albert Hall, Royal Festival Hall, Queen Elizabeth Hall, The Barbican, Kensington Palace, Eltham Palace, Hampton Court Palace, Wathen Hall, The Royal Academy of Music and The Royal College of Music. She is currently undertaking her undergraduate degree in Theology and Religion at St Peter’s College, Oxford University whilst continuing her studies on the violin.

Yes, I have a variety of classical and non-classical music prepared. However, I can play any popular music with at least a month's notice.

I do try to be flexible with timings but that would be dependent on travel times and how close it is to the event. However, it is likely I can change timings.

About 5-15 minutes, depending on if there are amplifiers etc.

Yes, however, you can also pick your own non-classical and popular music which you can give to me a month in advance. I am more than happy to chat through and make sure we find what works for your event.

Yes, I can learn anything with at least a month's notice!

That I really enjoy every performance.

I have had the privilege of performing in many prestigious concert venues and events with orchestras and ensembles including the Royal Festival Hall, Queen Elizabeth Hall, The Barbican, Kensington Palace, Wathen Hall, Eltham Palace, and Budapest music festival, as well as many churches and smaller venues.

Probably Nicola Benedetti; she has definitely influenced my style of playing a lot.

Performing with the London Philharmonic Orchestra, Benjamin Britten's 'Sea Preludes' in the Royal Festival Hall, which was completely packed. Something which I will never forget!

Chris B, 3 years ago