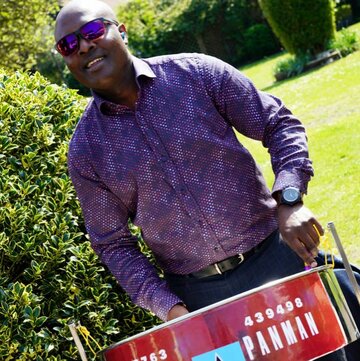 Warm friend amd entertaining ! Call me melodic panman ! Nothing but good music positivity, and most of all making everyone happy ! One love

Originally from the island of Saint lucia , I began music at the tender age of 14yrs ,where i developed the skilll as a guitarist and singer . I later went on to work within the cruiseship industry, for a duration of 9years, performing with numerous bands . During that period,I later added steel drum playing to my list of music skills!

Great, everyone enjoyed it. Would of been great if we could of had a few short samples as it was over quiet quickly. all in all a great experience.

Thanks for having me Gary, it was my pleasure .We will meet again! have a great one

Fantastic steel drums, everyone absolutely loved it. Such a lovely summery, happy sound. Brilliant musician, friendly and great communication. Would love to use again! Highly recommend. Thank you so much.

I’m happy I could have been a part of it ! See you another time ! Magaron

First class in every respect.

Highly highly recommend!! Super talented and friendly. I received so many compliments from the guests at my event. Would definitely rebook in the future!

ST
Sheena T
3 years ago, for a Private event in Epsom KT18

DT
Dan T
3 years ago, for a Birthday party in kt17

very effecient! and a good listen!

Steel drums bands in the UK