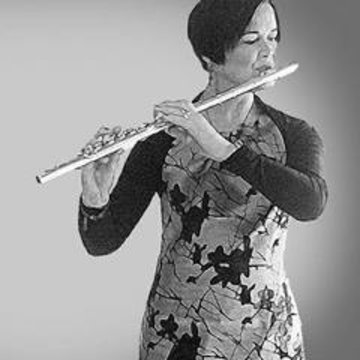 Lynne is a freelance professional flautist based in Edinburgh/Glasgow, playing in a number of orchestras/ensembles and as a soloist.

Lynne Bulmer MA -Music (with distinction), BMus (Hons), FRSM Lynne was born in Yorkshire and brought up on the West coast of Cumbria where she began studying piano and flute at an early age before returning to Yorkshire as a teenager. Following a number of years playing flute in the Northern Area Schools Symphony Orchestra, she graduated from Sheffield University with a BMus (Hons) degree having studied flute with Paul Chapman (Opera North) and went on to play in the Sheffield Chamber Orchestra for a number of years. After some time away from the flute, she returned to playing in the mid-90s, working as a peripatetic woodwind teacher in Yorkshire while studying with Stina Bisengaliev (Opera North). In the late 90s, she moved to the Scottish Highlands and studied for the three ABRSM flute performance diplomas (DipABRSM, LRSM and FRSM) with Catherine O'Rourke (Highland Chamber Orchestra), David Nicholson (Scottish Chamber Orchestra, RSAMD/RCS) and Paul Edmund-Davies (London Symphony Orchestra, Philharmonia Orchestra etc.) while teaching flute and piano privately. She also took part in masterclasses with William Bennett, Lorna McGhee, Katherine Bryan and Alison Mitchell. In 2004, she was awarded the final Fellowship of the Royal Schools of Music performance diploma and in 2005 successfully completed a Master of Arts in Music degree (with distinction) through the Open University. Now based in Edinburgh, she currently teaches flute and piano and has played in a number of ensembles and orchestras as a freelance performer and soloist, including Amicus Orchestra based in Glasgow, Meadows Chamber Orchestra, Fife Opera, Glasgow Chamber Orchestra, Afton Ensemble, Ensemble Alba, Opera dei Lumi, Kirkcaldy Orchestral Society, Milne Graden Chamber Orchestra, Edinburgh Chamber Orchestra, Aria Alba, Dunblane Chamber Orchestra, GAMA, the Rehearsal Orchestra, the Marlands Ensemble (based around a wind quintet) & gives occasional solo flute/piano recitals. Amicus Orchestra has enabled Lynne to work with a number of distinguished conductors and musicians including Christian Kluxen, James Lowe, Chris George, Garry Walker, William Conway, Robert Baxter, Oliver Rundell, Maximiliano Martin, Yann Ghiro, James Willshire, Gordon Bragg, Jessica Cottis, Katherine Bryan, Catherine Larsen-Maguire and Nigel Shore; she has been privileged to work with Levon Parikian/Robert Chasey (Rehearsal Orchestra) as well as with the Edinburgh Quartet (NYOS Variations). Since moving to Edinburgh, Lynne has studied with Joanna Shaw (Scottish Chamber Orchestra, Scottish Ballet) and in November 2014 performed her first flute concerto - Mozart's G major - with the Dunblane Chamber Orchestra (conductor: Mark Wilson). She performed as soloist in J S Bach's Suite no. 2 in B minor with the Edinburgh Chamber Orchestra in 2012, as one of the soloists in Bach's Brandenburg concerto no. 2 as part of Dunbar Choral Union's Spring concert in 2014 and was a soloist in Bach's Brandenburg no. 5 with Ensemble Alba in Dumfries in Sep 2018. Lynne has been flautist-in-residence for the Piano Accompaniment course (tutor: Nigel Hutchison of the Yehudi Menuhin school) at the Sherborne Summer School of Music every year since 2010 and is on the committee for Amicus Orchestra. In November 2018, Lynne travelled to Leipzig with Amicus Orchestra (conductor: Catherine Larsen-Maguire, soloist: Maya Iwabuchi) and performed a 'Scottish' programme (Peter Maxwell Davies - 'Orkney Wedding with Sunrise', Bruch - 'Scottish Fantasy' & Mendelssohn - Symphony no. 3 'Scottish') in the Gewandhaus to a capacity audience of 1,900 which was very well received. Lynne plays a Muramatsu GXIII flute with a Lafin (Adler-wing) headjoint.

Clients have appreciated the careful programming of my solo performances, particularly those that have asked me to suggest appropriate repertoire. They love the sound I make on the flute, especially in a church or large building and have appreciated my professional approach.

As an orchestral player, I have played in the Usher Hall and Queen's Hall in Edinburgh, St Andrew's in the Square and Bute Hall in Glasgow and in the famous Gewandhaus, Leipzig with Amicus Orchestra. As soloist, I have performed in St Giles' Cathedral, Dunblane Cathedral, Eilean Donan Castle and in many church buildings.

I love the flute playing of Emmanuel Pahud and Lorna McGhee and have always enjoyed the wonderful sound that William Bennett makes on the flute. I am also influenced by many other Classical musicians (especially string players), including James Ehnes, Jonathan Morton, Andras Schiff and Nicola Benedetti - I learn greatly from their phrasing and musicianship.

I played a concert of music by Peter Maxwell Davies, Bruch and Mendelssohn with Amicus Orchestra to a full house of nearly 2,000 people in the famous Gewandhaus in Leipzig in November 2018 which was very enthusiastically received by the audience.

All credit to Fife Opera (Magic Flute) for bringing their staging off with such success. Under the guidance of conductor Alistair Digges, the orchestral standards were remarkably high, with the band led by St Andrews-based Francesco Scattolin. It was all naturally paced and featured many lovely instrumental solos from the pit. "

Review of J S Bach's St John Passion in Dunbar Parish Church in May 2016 by Dunbar Choral conducted by Vaughan Townhill: "...The first of the solo reflections with the intricate woodwind accompaniment fell to the alto, Katrine Townhill. The talent of the woodwind section with the solo cellist and harpsichord continuo supporting her rich delivery was clearly going to be demonstrated as the story unfolded. Bach then offers the soprano soloist the chance to show her skill. Susan Hamilton obliged with perfection in her joyful declaration to follow her Lord and Master, matched by the skilful flute accompaniment "

After the interval came two very well known works, Bach's Brandenburg Concerto no. 2 and Vivaldi's Gloria. The orchestra, who played at a consistently high standard all evening complementing the singers with sympathetic and balanced accompaniment, came into their own in the Concerto which was played with flourish by soloists Pam Brown, Robert Dick, Ian Frost and Lynne Bulmer