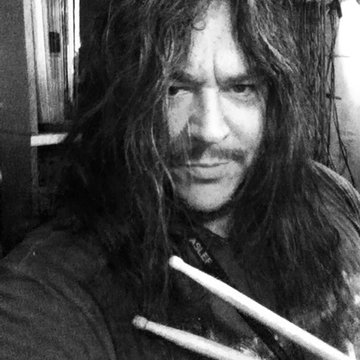 Luis Lopez was born in the Spanish city of Valladolid the capital of the Castilla y Leon region, Spain. He began to play drums and percussion at the age of fifteen, when he began his music studies, taking drum and sol-fa lesson, this way he was introduced to local musicians and mentors like Nacho Castro (Celtas Cortos) and Oscar Astruga (session). Soon enough he started to have collaborations and projects from many different music sources. At first with a walkabout percussion band (Batukada) “Samba d’aka” then as a drummer and percussionist of a traditional Castilian band called “Almenara”, whom had released two albums well respected within the Spanish folk circuit. Broadening his music experiences Luis was also part of many local projects from blues “Homohabilis”, Rock “El Clan”, Celtic Rock “Celtas Cortos”, and Folk “Esgueva” when he recorded in Madrid his first professional album as a session drummer. Mainly al that time he worked with Rock and Folk bands, especially successful with Rock bands like “El Clan” which achieved national recognition, touring Brittany (France) and while supporting twice the fantastic British band “Dr Feelgood” during one of their frequent Spanish tours, playing also behind bands like “La Tregua”, getting a great response nationally. Folk music as always interested Luis, being his source of great percussion, basic musical knowledge and experiences, collaborating with experienced bands and projects like “La Carraca” a traditional children folk band touring Switzerland on the summer of 1991, and along Castilian troubadour “Jaime la Fuente” and nova trove Cubana band “Homenaje”. His Spanish collaborations included the following variety of different styles such Prog-Rock “Enrocke”, Grunge “Valve brain Noise” and dance “Universal”, he also worked as a Drum tutor at the ” Musical Tamayo, Valladolid. Luis moved to England on the summer of 1994, mostly to resume and conclude his music studies, before doing that he got involved straight away with a funk project in Norwich, with the band “Intentions” having an ex “Ozric tentacles” member enrolled. In 1995 he moved to London achieving top marks in his drum Kit/snare drum examinations at Guildhall, and achieving his BMUS degree at TVU (UWL). He is continuously improving his piano, theory, and harmony skills. While in London collaborations are multiple and ever growing playing along bands like “Kreeping Jesus”, “Free vision”, “Geek”, and several cover bands like “The Peculiars” and the “The backyard dogs” but his better achievement so far was to become a part time teacher for the Oxfordshire County Music services, helping him to become a private tutor again as Luiscomp but this time with the knowledge of 15 extra years of active musical experiences behind him, now lunching "Drum Key" a drumming syllabus for schools and private students under his Luiscomp/Drum Key trademark. The final chapter so far is the fact that Luis is playing with the best band to date, the elusive “The Eons”, the band had several obstacles during it’s 9 years of existence but "The Eons" new material is ready to hit you all again very soon. Luis had a very serious operation last December 2009, he was becoming paralyzed from the waist down, the operation was successful but although, there is an awful load of work to do until he recovers the total control of his body he is back to practice and hopefully with the correct physiotherapy he will be on full gear very soon. He sincerely would like to thank all people involved with all his multiples activities and to express his gratitude to all those whom have supported him during these recently scary times, without your patience, loyalty and friendship he would have struggle enormously. Once again in the saddle Luis finished his Drumming lessons at Oxford to focus on his projects, suck Drum Key, Fab Hands Rhythms at the Pear Three Studio, Also he is recording and performing with his band The Eons, new material coming soon, and also he resumed his session work, recently working for Opera at home, at the Riverside Studios, performing Maria de Buenos Aires. (see,News, gigs and projects) He as also performed with top covers band Memento on late March 2015, more to come, while The Eons continue recording. On November 2015 While The Eons keep on recording more original material, the busy teaching and continuing improving Conga, Bongos, Darabuka, Djembe and Dhol, Luis started two more projects one a blues/funk/rock project still developing and the other a Hard Rock cover band Stone Thorn, soon enough gigging in a venue close to you, watch this space. Please check all those links and leave us a message. Thank you Luiscomp

Hello to all Coming from 5 years of playing, having had a few lessons when I started the rest being self-taught I felt I was quite an accomplished drummer. I was successfully playing live with a band and we we’re well received by all who heard us. However I knew there had to be more to drumming and that’s when I decided to find a tutor to see what I could really accomplish, having heard of Luis from another of his students I thought it would be a good place to start. From my very first lesson it was clear that I had LOT’S to learn but Luis’ professional, kind and encouraging personality made me feel completely at ease. Within the next few lessons my technique improved noticeably which was commented on by others in my band and this gave me a massive confidence boost while also driving me to want to do more. Luis asked what I wanted to achieve and after a thinking about it I decided the best way for me to progress would be to become a graded percussionist so we started down that route. Luis recommended I start at Grade 3 and go from there so we started, I would have a lesson bi-weekly and practice daily, within 8 months I nervously sat the exam. It didn’t matter how many times Luis would tell me not to worry and fill me with positive comments, at 34 years old taking an exam was a daunting experience and I was certain I’d only just scrape through if not fail. 17th December arrives and here I am sat in a school car park going over rudiments on my practice pad and waiting for my name to be called… 20 minutes later I’m done and back in my car feeling half positive, it hadn’t ALL gone wrong and the examiner wasn’t the devil personified but being my own worst critic I predicted a pass at best for my efforts. It’s now New Year’s Eve and THAT letter finally drops on my doormat, I sit and nervously open it with my wife, I’ve scored 97/100! A pass with Distinction! What a way to welcome in 2016. I strongly believe this outcome is down to Luis and his great teaching methods, he is entertaining, patient and very encouraging. I highly recommend Drum Key to any budding percussionists out there you will see the benefit. Next up Grade 4. Thanks Luis!

I thoroughly enjoy Luis Lopez's lessons. He offers a very helpful enthusiasm and a great technical skill that gets me through the set pieces for Drum Kit grades as well as offering me work sheets and challenging exercises to help me improve my technique. I believe that my playing has progressed massively since I began lessons with Luis. Thanks. Ciaran.

I have been receiving instruction from Luis now for approx 13 weeks , in that time I have gone from a beginner who knew nothing about drumming to being able to play the drums & read music. I still have a long way to go but have manage to progress to grade 2 Guildhall since beginning my instruction with Luis , now approaching level 3, also will be sitting exam shortly as well. Luis is most helpful not just in his instruction but regarding any aspect of drumming nothing is to much trouble, he is patient friendly & supportive too & I would have no hesitation in recommending him to anyone who wanted to learn the drums.Thanks again Luis keep up the good work my friend Bob _________