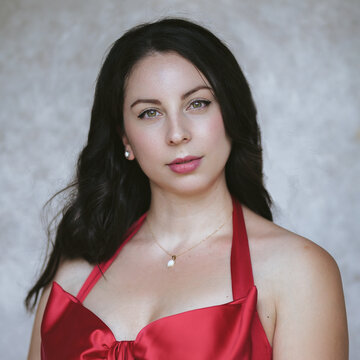 Lucy Elston is an award-winning lyric soprano based in London. A winner of Wilton's Music Hall's 'Music 4all' competition in the Opera Category 2020, finalist of the Douglas Rees Memorial Young Opera Singer of the Year 2019, and awarded with an honorary mention by the panel of the Kyrenia Opera Competition 2019, she has been called "a very sensitive singer and performer" with "a mature and nuanced musicality as well as a skilful and generous presence on stage." (Kelvin Lim, Musical Director). Her singing has been described as displaying 'a beautiful sense of line and a lovely bright tone.' (Colin Edwards, conductor). Lucy recently graduated with Distinction from the Wales International Academy of Voice where she studied under the tutelage of Dennis O'Neill and Nuccia Focile. ​​ Lucy's roles include Pamina ‘Die Zauberflöte’ (WIAV Opera Role), Euridice ‘Orfeo ed Euridice’ (Grassroots Opera), Galatea ‘Acis and Galatea’ (Aylesbury Opera), Suor Genovieffa ‘Suor Angelica’ (Opera in the Meantime), Mrs Gobineau ‘The Medium’ (Clockwork Opera), Cathleen ‘Riders to the Sea’ (City Lit Opera), Grittly ‘Le 66’ (Irrational Theatre), and Maria ‘West Side Story’ (Saint Monica's Players). For Trinity Laban Opera Scenes, she played Blanche ‘Dialogues des Carmélites’, Donna Anna ‘Don Giovanni’, and Woglinde ‘Das Rheingold’. ​​ Lucy has a particular interest in Modern Opera. In July 2019 she took part in the Tête à Tête festival, both as a Director, and in the role of Elder Sister for Motley Opera's production of The Cruel Sister. In 2018, she created the role of Natalya for the premiere of John Whittaker's Opera 'The Proposal' which was performed as part of a Comic Triptych at The King’s Head Theatre. Lucy performed with British Youth Opera for their production of The Vanishing Bridegroom, working with Stuart Barker, James Holmes and Mandy Demetriou. For Trinity Laban Opera, she portrayed Rachel Turner in the world premiere of Stephen McNeff’s Banished, working with Elaine Kidd and Jessica Cottis. ​ Recent concert engagements include Haydn's Nelson Mass (Sidmouth Choral Society) and J.S.Bach’s St John Passion (Southend Bach Choir). Lucy has taken part in masterclasses with David Gowland, Susan Bullock, Ryland Davies, Della Jones and Janice Chapman. She has enjoyed performing in The Royal Albert Hall, Cadogan Hall, Buxton Opera House, St Albans Cathedral, Leeds Town Hall and The ORNCC in Greenwich. ​ In 2017, Lucy graduated from Trinity Laban Conservatoire with Distinction for her MMus in Vocal Performance. At Trinity she studied with Alison Wells, and was a grateful recipient of the Kathleen Roberts Scholarship Award. She also has a BA (hons) degree from The University of Leeds, where she studied music and graduated with a 2:1 in 2011. ​ Lucy founded a company ‘Opera In The Meantime’. She made her directing debut with Puccini’s ‘Suor Angelica’ and in 2018 she directed and produced Humperdinck’s ‘Hansel and Gretel’.

A very sensitive singer and performer." "A mature and nuanced musicality as well as a skillful and generous presence on stage."

"A great performance - You captured the atmosphere of the poem absolutely."

"A lively performance!... Good Contrast between the different airs... I like the change of vocal colour."