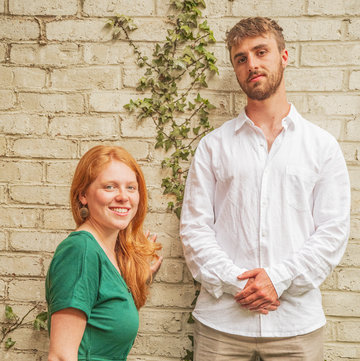 Watch & Listen
About
Song list
Prices
Reviews
Home page
Lucy & Aidan
Like Lucy & Aidan?
Watch & Listen
Watch
Listen
1-3 of 3 videos
The Nearness of You
Très Tôt (Very Early)
If The Stars Were Mine - by Melody Gardot

Midlands based vocal and guitar duo, performing a wide repertoire of songs to bring a unique musical experience to your occasion.
3 of 13 photos
Jazz duo
Birmingham
Public liability insurance of £10 million

Midlands based vocal and guitar duo, Lucy and Aidan, perform a wide repertoire of material, spanning from the Jazz American Songbook and Latin and Bossa grooves to more contemporary arrangements. Drawing inspiration from the Jazz tradition, English folk and French song, Lucy and Aidan create a unique musical experience for every occasion, helping to provide a heart-warming, soulful, yet joyful atmosphere for your family, friends and guests. Aidan is an emerging jazz guitarist, composer and educator based in Birmingham, UK. During his 4th year at Royal Birmingham Conservatoire studying jazz guitar, Aidan released his debut EP, 'H A R B O U R S'. This EP is inspired by the guitarists influences of Jazz, contemporary and improvised music, as well as his time spent in Norway and his home in the UK. Aidan has also been awarded the Phil Miller solo guitar prize and was noted as having a strong improvisation aesthetic by British guitar legend, John Etheridge. After graduating with a 1st class Honours Degree, Aidan continues to make strides in the jazz world, recording with musicians such as Iain Ballamy, playing in Jazz Clubs throughout Europe and having airtime on radio stations, notably the Brooklyn Free Radio's segment, Mondo Jazz. Lucy Mellenfield is an emerging singer, songwriter and educator based in London/ Birmingham. After completing her degree in Music with French at the University of Southampton, Lucy is currently studying for her MMus in Jazz Voice at the Royal Birmingham Conservatoire. Taught under renowned vocalists, Sara Colman and Noemi Nuti, Lucy is honing her craft and making her mark on the Birmingham music scene. Following the release of Lucy’s debut EP ‘In My Short Time’ in 2020, her songs have received airplay on multiple occasions on the BBC Introducing Solent radio show. One of her tracks ‘Beautiful Soul’ made it to ‘Record of the Week’ and her music was included in their ‘Best of 2020 show’ in January 2021. “She sings in the way people talk about someone they love - passionately, with varying levels of dynamic range and emotion.” - George Miles, Voice FM. Her writing style is largely influenced by jazz, folk and singer-songwriter genres, but Lucy is not one to restrict herself. Merging sound worlds and writing lyrics and music that come from a profound personal space allows her to paint pictures and evoke unique, genuine feelings for each of her listeners. Bringing music into people’s lives and encouraging singing as a wellbeing activity is another passion of Lucy’s. Her work has ranged from co-leading Jazzmanix, the University of Southampton’s Pop & Gospel choir, and The Ordnance Survey workplace choir, to running online singing sessions for the Royal College of General Practitioners.

Jazz American Songbook:
The Nearness of You
Over The Rainbow
Dream a Little Dream of Me
Cheek to Cheek
'Tis Autumn
Lazy Afternoon
Autumn Leaves
Georgia On My Mind
I Cover The Waterfront
It Could Happen To You
Manhattan
Summertime
Autumn in New York
Sophisticated Lady
Come Fly With Me
I Thought About You
Never Will I Marry
The Song Is You
The Masquerade Is Over
Love Is Here To Stay
Love For Sale
Night and Day
I'll Remember April
All of Me
In Love In Vain
On The Sunny Side Of The Street
Detour Ahead
Caravan
A Flower Is A Lovesome Thing
Let's Get Lost
A Night In Tunisia
A Tisket A Tasket
Alone Together
Days of Wine and Roses
Falling In Love With Love
Stella By Starlight
There Will Never Be Another You
Midnight Sun
Do It The Hard Way
Nature Boy
Misty
Honeysuckle Rose
In A Mellow Tone
Jazz Standards (French Lyrics):
Très Tôt (Very Early)
Je Ne Repartirai Pas (L-O-V-E)
C'est Si Bon
It Might As Well Be Spring
Blues :
Moanin'
Centerpiece
Latin/Bossa Tunes:
So Nice
If The Stars Were Mine (Melody Gardot)
Night and Day
The Girl From Ipanema
Moon and Sand
There's a Lull in My Life
Dindi
Wave
Pop/Folk:
Imagine
Both Sides Now (Joni Mitchell)
A Case of You
True Colours
What A Wonderful World
Fields of Gold
The Sounds of Silence (Paul Simon)
Just the Two of Us
Harvest Moon (Neil Young)
You and Me

JR
Jane R
9 months ago, for a Hotel / Restaurant event in Main St

We thought Lucy and Aidan would be perfect for one of our Friday acoustic evenings and weren’t disappointed. They created just the right atmosphere with their relaxed jazz repertoire. Lucy has an amazing voice and they are both superb musicians. We look forward to having them back again soon The Bank Coffeehouse, Alrewas

Turned up super early, professional set up and lovely music. Just what we were looking for.