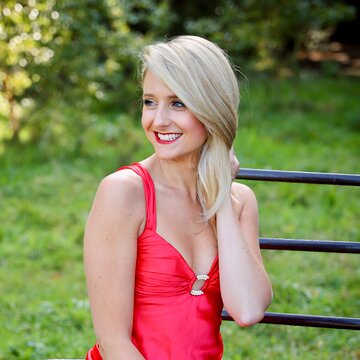 Lucinda is a professional opera singer and studied at the prestigious Guildhall School of Music and Drama. She also sings other genres.
3 of 31 photos
Singer (soprano)
London

Lucinda is a Soprano from the Wirral. She studies with renowned voice teacher Gary Coward, who teaches Gerald Finley and other international stars, on the Masters course at the Guildhall School of Music and Drama. Previous teachers include Amanda Roocroft and Jeffrey Lawton. Her operatic roles include the title role in Charpentier’s Actéon (Royal Birmingham Conservatoire), she created the role of Georgia in Ava's Wedding, a premiere by Professor Michael Wolters, (Royal Birmingham Conservatoire) and Pamina (Opera at Bearwood). Lucinda sang in the chorus at Longborough Opera Festival in Orpha Phelan’s 2017 production of Fidelio and in the same year sang in the chorus at Opéra de Baugé in their productions of La Clemenza di Tito and Lucia di Lammemoor. This year Lucinda returned to Longborough to sing in the chorus of Thomas Guthrie’s production of Der Fliegende Holländer, under the baton of Anthony Negus. She has also performed in excerpts from the following operas: The Marriage of Figaro (Susanna) Così fan tutte (Fiordiligi) La bohème (Mimi), Albert Herring (Miss Wordsworth), Christopher Columbus (Gretel), Riders to the Sea (Cathleen) Hänsel und Gretel (Gretel) La finta Giardiniera (Serpetta), Cendrillon (Noémie) and the title role in Madame Butterfly. As a concert soloist Lucinda is active as an oratorio singer and has sung with many choral societies including Elijah with the Shrewsbury Cantata choir, Mozart Requiem and Haydn’s Harmoniemesse with the Bristol Ensemble, as well as many concerts for Birmingham Festival Choral Society. In 2016 Lucinda was filmed singing, as part of a medieval ensemble, for BBC Songs of Praise in their Easter Sunday programme. In Lucinda’s final year at the Royal Birmingham Conservatoire she performed Ravel’s Shéhérazade with the Royal Birmingham Conservatoire Symphony Orchestra in the Adrian Boult Hall. Whilst studying in Birmingham Lucinda was a finalist in the Mario Lanza Opera Prize, the John Ireland Prize and the Birmingham Conservatoire Singing Prize. Lucinda has sung in masterclasses with Yvonne Howard, Richard Stokes, Ruby Philogene, Amanda Roocroft, Martin Katz, Felicity Lott and Kate Royal. Most recently Lucinda was delighted to have been selected to spend a week working with Sir John Tomlinson and conductor Benjamin Zander at the London Masterclass Series.

Verified
Debra I, 1 year ago

Lucinda was on time, pleasant, and very professional. Lovely voice. Thank you!

'The princess, Pamina, (Lucinda Scott) communicated a whole range of emotions with the most beautiful soprano voice' https://www.wokinghampaper.co.uk/review-opera-bearwood-presents-magic-flute/

'The standard of singing rose dramatically after the interval with Donde lieta usci from Act III of Puccini’s La bohème: Lucinda Scott was a vulnerable, glowing, enthralling Mimi' http://seenandheard-international.com/2016/06/city-of-sounds-saying-goodbye-to-birmingham-conservatoires-adrian-boult-hall/?fbclid=IwAR3zb22EATTFyTLOi3nb-otD1RLcQe77TKyMpUbANde6M57mrkjYk1NVaho#more-64035