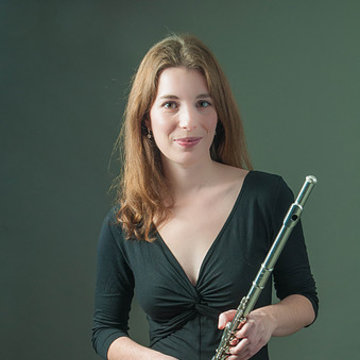 Luce Zurita is a French London-based flautist. She completed her Masters degree at the Royal College of Music in London studying with Susan Milan, and previously at the Conservatoire of Rouen with Jean-Christophe Falala. A finalist of the Croydon Concerto Competition 2013, she was awarded the Charles Sampson “Young Soloist” award and the Jellinek Prize and has performed with various orchestras as a soloist, notably in Cambridge West Road Concert Hall. As an orchestral player, Luce has played under the baton of Vladimir Ashkenazy and Bernard Haitink and was invited to Buckingham Palace for HRH Prince Charles’ 65th birthday as principal flute of the RCM Chamber Orchestra. A keen chamber musician, she performed in Royal Albert Hall’s Elgar Room, Kings Place, the Houses of Parliament, V&A Museum, the National Gallery with the Globe and Giverny Ensembles. A keen advocate of new music, she records film music and works alongside composers, premiering numerous works. One of these was broadcast on BBC Radio 3. Luce would like to thank her sponsors without whom her London studies would not have been possible: the Leverhulme Postgraduate Studentship, Lee Abbey London and the Rotary International Club. Luce holds a Master-degree in French and Comparative Literature from Paris-IV-Sorbonne university after having followed a 2-year Hypokhâgne and Khâgne course. Alongside editing and translating professional activities, she is now a writer for the Opera of Rouen Normandie, a lecturer and a musicology researcher.