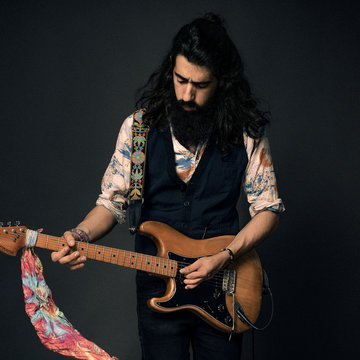 I'm a 24 year old guitar player, sound engineer and producer based in NW London. Get in touch and let's make some music together!
3 of 21 photos
Guitarist
London
Public liability insurance of £10 million
Verified profile

Since I came to London six years ago all I've done is music. Having completed two music courses already, my knowledge of styles and theory is quite broad, and on top of that I'm a regular performer in London with small bands or as a hired gun, doing tribute acts or simply jamming, so I feel at ease with new musicians and different environments. Over the last few years I've had the pleasure to perform with members of Razorlight, The Blockheads or Razorlight, and to record at world renowned studios like Metropolis or Lightship95, with producers Rory Atwell ( The Vaccines/ Palma Violets) or Liam Nolan ( Michael Jackson, Paul McCartney, Amy Winehouse) I've worked as a Tour and Studio Manager and engineer, so I know how to handle gear and equipment, as well as a Promoter for nights like Circus Extravaganza, The Last Gig in Town or The Songwriter's Guild-I've also been lucky enough to perform with a wide range of singers and musicians over the years, playing blues, rock, funk and pop music, in venues like The Clapham Grand, The Hard Rock Café, The Old Blue Last, the Gibson Showrooms, Hootananny Brixton, The Barfly or the London Olympics, to name a few as well as festivals like Camden Rocks, Curious Arts Festival, Unsigned London, Tunnel to Tunnel or Hanwell Hootie, plus venues all over the U.K, in cities like Bristol or Brighton . Having taught guitar back in Spain, I also believe I have the right communication skills and a desire to share what I know with others. I work well with pressure and I'm flexible. I'm currently involved in a number of bands, including function bands, 12 piece funk band W.S.F.B., Rock bands The Scruff Club, Cartoon Shadows, Futterewacken or Dolly Spectra, as well as Phil Manzanera's( Roxy Music, David Gilmour) Sound of Blue Band. I'm also an in house engineer at ICMP studios, and run different music nights with my promotion company Lemongrass.

They are an absolutely amazing funk band which give a truly epic live show!!!

Thank YOU so much, it really was a great set and great to work with you guys too

We would love to have you back!!