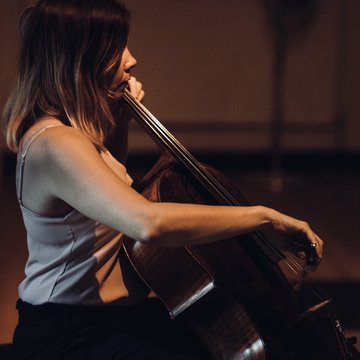 Louise is an experienced professional cellist with a huge repertoire of well-known classical music and songs to enhance any event.
3 of 8 photos
Cellist
London
Public liability insurance of £10 million
Verified profile

Louise Dearsley (cello) Louise graduated from the Royal College of Music in 1995 and has since pursued a varied freelance career. She has worked on West End shows, touring opera companies, and made numerous recordings and TV appearances with well known pop artists. Louise is a regular extra player with several professional orchestras and has been a full-time member of both the Iceland Symphony and RTE National Symphony in Ireland. She regularly performs at events and functions in venues such as Empire Casino and the Tower of London.

Verified
Jean-Pierre A, 1 month ago

Verified
Ari A, 4 months ago

Louise was fab, she contacted me prior to the concert to discuss musical options, played a fantastic set and was generally a pleasure to work with. Great job!

Louise was a great asset to this event. Would definitely book her again, Michael

Verified
Nick B, 3 years ago

Louise was very punctual, polite and professional. I would definitely recommend her for anyone wanting a string musician at a event. Thanks again Louise!

Verified
Toby B, 1 year ago

I recently used Richmond strings on two projects and was delighted with the results. They were great to work with, highly professional and great players.

Verified
Graeme B, 2 years ago

Absolutely brilliant... Walking into the church to hear Louise playing Hallelujah for our father which was one of his favourite Leonard Cohens pieces was so heart wrenching but sounded so good. Everyone spoke to us afterwards about Louise and how good she was and how nice it was to walk in and out of the church to a beautiful sound emanating throughout the church. Thank you so much Louise.

Louise played the cello at our small wedding at Chelsea Town Hall. She was really helpful in choosing the music beforehand and always available for our questions. On the day she was punctual and organised. The music was wonderful- Bach's cello suite No 1. especially. It really added to the ceremony. We were considering not having music but this was definitely the best decision we made. (10 / 10)

Louise was a pleasure to work with - she responded promptly to emails and arrived with plenty of time on the day of the event. Most importantly though, her music was absolutely beautiful and very well suited for the event. Will book her again! (10 / 10) Iris

Verified
Nick B, 3 years ago

Louise was very punctual, polite and professional. I would definitely recommend her for anyone wanting a string musician at a event.

Dear Louise I wanted to thank you for coming to my studio to record the other day. You play the cello beautifully with great feeling and passion. The recordings we did have surpassed all my expectations. You exude class and confidence when you play and your ideas and contributions beyond reading the notes display a musicality and knowledge of your craft that many session players simply do not have. I very much look forward to working with you again in the future. With best wishes, Tim