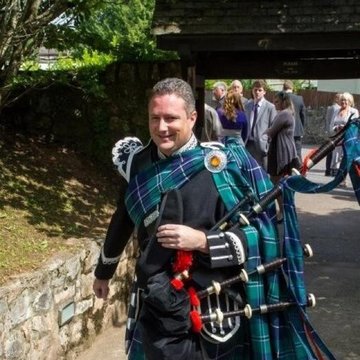 Lorcan Drysdale is a Scottish Highland Bagpiper and has been playing the Bagpipes for over 30 years.
3 of 5 photos
Bagpiper
Taunton
Verified profile

Lorcan Drysdale started playing the Scottish Highland Bagpipes at the tender age of 12 and has been playing for almost 35 years. During this time Lorcan has received many accolades and has won many competitions both as a soloist and Pipe Band member. Within 2 years of learning to play the Bagpipes, Lorcan had won many Irish solo competitions and went on to become the Provincial Juvenile Champion of Leinster three years in a row and placed in the top 4 in the All-Ireland Championships at Juvenile level several times. Having left Ireland in 1990, Lorcan became a member of a former RSPBA Champion of Champions band called the Pride of Murray Pipe Band based in West London. As a member of the band, Lorcan played in all the major competitions including the World Championships where the band were consistently placed in the top 6 in their grade. While Lorcan was a member of the band, it progressed from Grade 3 to Grade 2. Lorcan also had the privilege of being a member of the band when they were invited to be the only civilian band to play for Her Majesty the Queen and other members of the Royal Family on the occasion of her Golden Jubilee in 2002.

Tunes required to be discussed on booking!! If it can be played on the bagpipes and there is enough time for me to learn it then I'll play it!!

Lorcan is a lovely friendly man and an excellent piper. He was playing at the venue as all the guests arrived as requested and was more than happy to have photos with us all. Would recommend to anyone

Verified
Mark B, 2 years ago

Absolutely fantastic. Lorcan looked super and was a great piper. Our guests were over the moon with him. I cannot sing his praises highly enough. Tank you Lorcan and Encore.

Thank you very much for making such a sad occasion memorable.

We had Lorcan for our wedding in Devon in December 2011 and he was absolutely fantastic. He went out of his way to meet us initially to discuss our choice of music and offered some really great advice in respect of some of our song choices. On the day he arrived nice and early!! The guests absolutely loved him as did we, when we look back at our photographs of the day we definitely know that the day would not have been the same without him there. He brought that traditional piper feel that makes a wedding a good wedding! He played a wonderful mix of old and new Irish and Scottish tunes for us and sounded magical and haunting as well as uplifting and rousing and really added to everyone’s enjoyment of the day. We wouldn’t hesitate to recommend Lorcan if you are thinking about a piper, go on book him, you will regret if you don’t!

Just wanted to say thank you for playing at my Dad's funeral on the 3rd of March. It was a perfect tribute to my Dad and I know he would have been proud hear the pipes ringing out around the chapel. We have had lots of wonderful comments in regards to you playing at the service. Hopefully one day we can book you for a happier occasion. On behalf of myself, the close family and friends of my Dad and of course my wonderful Dad... Thank you.

Just wanted to say a very big thank you to you for coming over to Portland on Saturday and playing the pipes at Nicola's Birthday party. It made it very special and we were very grateful. It was a lovely surprise for Nicola .