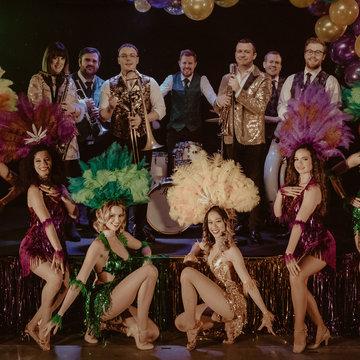 About The London Street Band

With vocalist, sousaphone, trombone, trumpet, saxophone and drums, the Prime Time Street Band fuses the foot tapping feel of a New Orleans street band with some of the most popular chart hits from the 20th and 21st century. Bringing together musicians with a wealth of experience from a wide range of genres, Prime Time Street Band is cooking on gas, and their sole mission is to entertain! The Prime Time Street Band is a refreshing alternative to the traditional party band, and will add a unique touch to your event. In addition to the modern repertoire, this versatile ensemble can also perform traditional New Orleans instrumental music for a lighter situation. Members of the Prime Time Street Band have worked with countless artists such as Martha Reeves, Take That, Clark Tracey, the James Taylor Quartet, the Glenn Miller Orchestra and the Nick Ross Orchestra as well as performing regularly in West End and touring shows.

Brilliant! Just a fantastic night with great music and interaction from the guys in the band. We had a great time, lots of fun and will book them again next year!

We absolutely loved the London Street Band. They made our wedding wonderful and were so helpful in all of their communications. Our guests loved the music and they read the crowd really well. We only wish we could have had them play for longer as everyone wanted to keep dancing. Thank you so much!

Pleasure to deal with, friendly and participants loved them!

Absolutely awesome band. Were great to deal with and totally wonderful entertainers on the day - couldn’t be happier!!

Fantastic! I researched a lot of bands but I was very impressed with their videos. When they performed in person, they excelled my original fantastic thoughts. Can't give enough compliments, superb!

This group were amazing - everyone raved about them and they added that something special to our cocktail reception. Weddings sometimes can take a slightly sober turn whilst the bride and groom are being photographed but with Prime Time entertaining our guests, this was not the case. The atmosphere was buzzing and all of our guests were tapping their feet along to the must. It was absolutely perfect and our day wouldn't have been as special without them.

Great band - thank you for stepping up at such short notice. Really enjoyed your performance!