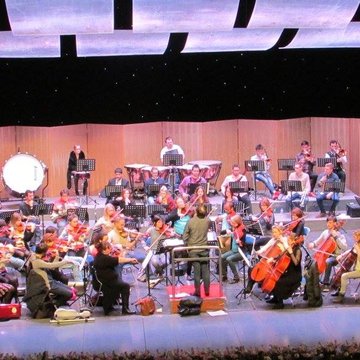 The London Arte Chamber Orchestra, an independent orchestra performing a vast repertoire with great seasons of orchestral concerts and chamber music recitals. Our many activities include an energetic and ground-breaking education and community programme to raise funds by performing charity concerts all across the United Kingdom. London Arte Chamber Orchestra has proudly build up and re- started the programme “Music to Heal” to help by raising funds for many charity organisations. Principal conductor Fabricio Brachetta conducts the London Arte Chamber Orchestra, fully integrated by professional musicians, with passion to deliver new music and great soloist opportunities focusing on performing a vast repertory and music from all periods and styles. Laco has recently been part of a vast and successful tour to China in 2015, 2017 and 2018. Further tours will include a tour to Poland and Germany in 2020 with Laco and 'O'ton' ensemble with chamber music concerts in Stuttgart, Germany. Laco is now on its exciting 10th year anniversary and performs on residence at St. Giles in the Fields, London.

Having only experienced it once, it is difficult to put my feelings, impressions, and thoughts from Brachetta’s string quartet, separated into three separate movements, into words. To some extent, what I can express will only be ‘general’, but… I thought it was wonderful. Structurally, the first movement grabbed me and took me on a fast-paced journey – it was frantic, confusing, violent and visceral. During the second movement, I felt a ‘drop’ in energy, a lull and a calming, but a false one –a mixture of emotions similar to the feeling one gets between a headache and the state of reverie as one wakes from a dream – damp, cloudy and nostalgic. Then the third movement picked up again. Revitalising and re-energising, it took me back to the first… almost. It was as if there was something slightly different – it was reminiscent of the first, but there had been a change, as if Fabricio had metamorphosed, had been unknowingly re-directed, by the events and concomitant emotions caused by those in the second movement. It felt like the first movement was Brachetta in his true element – hectic, passionate, excitable, frustrated… Then the nature and energy expressed in the ‘events’ of the second movement had changed (or were changing) him… almost as if he were caged – left ignored, drugged and sedated by the challenges and vicissitudes of everyday life. Then the cage door was opened. There was still the need and desire for self-expression, but it felt like there was a struggle within, that he was finding it impossible to absolve and release himself from the things that had changed and affected him… like after one loses a loved one, through death or separation… They have had an effect on one’s existence, and can never truly be deleted from the history of the soul. It felt that Brachetta’s natural spirit was most truly represented in the form of the cello – calm, authoritative, secure, but quiet… Like when one is truly relaxed, rested and without worry. The first violin felt like the movement and mood of his mind – powerful, chaotic but organised, directorial and communicative. The second violin and the viola felt like Brachetta’s insecurities and instabilities within himself and with the world around him, interrupting the truthful aspects and expressions of his individual self, and representing the elements of (his) life that cause doubt and anxiety. A fantastic piece of moving and challenging music! (STEPHEN PUCCI AT LONDON’S COMPOSERS GROUP-LONDON)

“A fantastic night of moving and challenging music!. The orchestra shows a fantastic balance and understanding of the classic repertoire. Anahit Chaushyan was superb performing Mozart’s Piano Concerto 27 with London Arte Chamber Orchestra