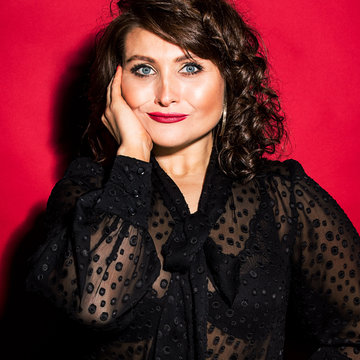 Pop/Rock/rock and roll to easy listening, classical crossover and musical theatre A multi award winning vocalist to cater for any occasion
3 of 25 photos
Singer
London
Public liability insurance of £10 million

Lisa-Marie Holmes Award winning cabaret artist and musical theatre performer, Lisa-Marie performers her cabarets world wide on land and sea. Cabarets include ‘Icons’ The Streisand Version’ and ‘POPular Musicals’ Most Recently performed in Robin Windsors 'The Last Dance' as a lead vocalist, Novello Theatre London Lisa Marie played the role of Diva 1 in the 2015-16 number 1 UK and International tour of 'Priscilla Queen of the Desert' she then went on to join the cast as lead vocalist on the ballroom dancing extravagansar 'Keep Dancing' number 1 UK Tour, Staring Robin Windsor, Anya Garnis, and many other stars from ITV's Strictly Come Dancing, Lisa Marie then continued on the 'strictly scene' as lead vocalist on Pasha Kovalev's 2017 UK tour 'Let's Dance the Night away'.. Other Credits include, Robin Windsor's 'The Last Dance' Novello Theatre London, Dance The Night Away' Tour of Sweden, Joanne in 'Rent in Concert The 20th Anniversary' UK Tour, Barbara Streisand in the UK tour of ‘You Don’t Bring Me Flowers, Marina Isakov in Rehab the musical, Mrs Darling & Mermaid In Peter Pan, Lichfield Garrick, Tina Charles in the UK and European tour of 'Hold Tight its 70's Night’, Hera in the London premier production of 'Jason and the Argonaught's' at the Cochran Theatre, London and Eco Maguire in 'Rave On' The Buddy Holly story In addition Lisa-Marie appeared in 'The Best of West End and Broadway' With the Birmingham City Symphony Orchestra,Symphony Hall, Birmingham. The Birmingham Hippodrome 100th Birthday Gala Celebration, The Sapphire Soul Show, London Hippodrome Casino and The My Gosh Marvellous, Big Band Show, London and Divalution the re-launch show at The Other Palace theatre, London. Lisa-Marie is also featured on the ordinal cast recording of 'Musical of The Year'

I have put quite a few popular song in this list but please ask as I have a huge rep of songs of many genera from Pop/Rock/Rock and Roll to Classical/Musical Theatre
Wanna dance with somebody
Happy
Forget you
Valery
Dolly Parton Medley
ABBA Medley
Motown Medley
New York, New York
Puppet on a string
Say a little prayer
Gloria Estefan Medley
Never walk Alone
Hold me thrill me kiss me
Worst things I could do
Hopelessly devoted to you
I can see clearly now
Jump
Secret love
Chasing pavements
Warwick Avenue
I want it that way
Not the only one
Uptown Funk
That Man
Sweet Nothings
Great balls of fire
All about that base
Yes
Sweet child of mine
Never tear us apart
Upside down
Candy man
It’s oh so quiet
Raining Men
Kiss my honey
Hungry eyes
Let’s hear it for the boy
I will survive
Girls just wanna have fun
Don’t stop Believing
Last dance
Believe
strong enough
Proud Mary
What’s love get to do with it
Walking on broken glass
Sweet Dreams
Rolling in The Deep
I love to love
Never can say goodbye
1,2,3,4,5
Rhythm is gonna get you
Will you still love me tomorrow
Shake
Doctor beat
Wherever whenever
Get Away (Shakira)
Dancing in the moonlight
Mercy
Empire State of mind
Woman in Love
Don’t rain on my parade
Evergreen
Be my Baby
Hey Baby
Don’t it make my brown eye blue
Crazy
Lipstick on you collar
Stupid Cupid
Natural woman
Someone like you
Run
Gold Finger
Diamonds Are Forever
Skyfall
Blame it on the boogie
One of up
Mama Mia
Fernando
Thank you for the music
The winner takes it all
Baby Love
My Guy
Band of gold
Stop on the name of love
Think
Respect
To make you feel my love
When we were young
I will always love you
I have nothing
Where do broken hearts go
Run to you
Caruso
Time to say goodbye
China in your hand
Time to say goodbye
Walking in Memphis
All about that base
We are family
Skater boy
Song bird
Somwhere over the rainbow
Car wash
Immortality
Better the devil you know
If I can’t have you
Never enough
This is me
Into the unknown
Let it go
My heart will go on
Power of love
Think twice
Never forget you
Tainted Love
Get on your feet
Life on Mars
Ghost
It’s a mans world
Simply the best
9-5
Hallelujah
River deep mountain high
Firework
My boy lollipop
Young hearts
Shout
I’m out of love
Left outside alone
Cupid
Down town
Que Sera
Anyone who had a heart
You’re my world
Walk on by
Never fall in lobe again
Black horse cherry tree
Suddenly I see
Mambo Italiano
The way we were
All coming back
Pice Tag
Domino
Bang Bang
Big Spender
Can’t help falling in love with you
I drove all night
As long as he needs me
Somewhere
Don’t cry for me Argentina
I Dreamed a Dream
Customer questions

Peter B, 4 years ago

Hi Lisa just wanted to thank you for the amazing performance you gave at my birthday party. You voice awesome and the standard of your act so professional. Please keep in touch and let me know if you are doing public engagements in the UK as I and many of my guests would love to come and support you. We all had a fabulous time. You made my night so special. Regards Peter Buffey x

Dear Lisa Halina and I just wanted to let you know how much we appreciated the performance you gave at my Captains night and golf presentation dinner at Hagley Golf club. You wowed the audience with your musical theatre set and had us all up dancing at the end of the night. A fantastic time was had by one and all. You are amazing. We look forward to seeing you again soon Kind Regards Ray x