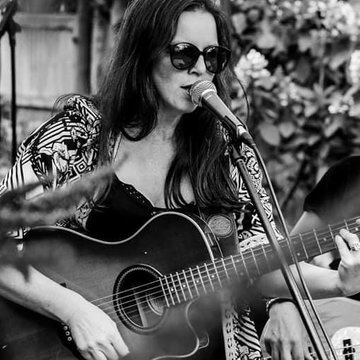 Lisa is an amazing singer/guitarist whose live performance is second to none. She is brilliant in every way, her songs, her vibe, her music

KWEI’s inspiration has come from many great songwriters like Joni Mitchell, Stevie Nicks and Bob Marley and she hopes she can bring some heritage to her pop sound. “My band are amazing musicians in their own rights, I am at the stage in my career where playing to fans is all I want to do, bringing music to people live is so special, and must be protected”. After her recent fan only release of her second album in Dec 2015 LEAVE ONLY FOOTPRINTS, KWEI has gone on to do further recording sessions at the iconic Metropolis Studios in London and they have worked with Engineer Tim Roe (Prince, Coldplay), and Master Engineer Stuart Hawkes (Amy Winehouse, Ed Sheeran) on crafting adaptations of her tracks and one very special cover of a Bob Marley classic Waitin in Vain. She has played at many great events such as Weyfest, Guilfest, London Hippodrome, Volksworld, to name but a few. She loves to perform live and has made many weddings, parties and corporate events a brilliant success. Don't miss out!

No problem unless after 12 midnight

1 special song at no extra cost

My voice. My band. The song choices and the professionalism

We really enjoyed the gig thank you so much for having us. Best Lisa x

Thank you it was a lovely party. X

Amazing Solo performance that made my wedding day!

Such a great band, you really rocked the place in Berlin for our corporate function, thank you x