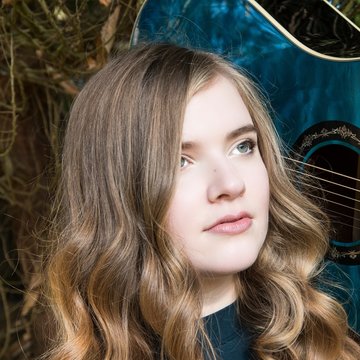 Singer Songwriter with a charming range of covers and original material to make you smile, cry or feel something!

Since teaching herself to play guitar aged 13, Lisa has been writing songs and gigging all over Scotland. From festivals to football stadiums, busking to beer festivals and even promoting her own gigs and hiring other artists, Lisa has grabbed every opportunity to entertain and develop as a performer. 2017 was a breakthrough year in which Lisa released her debut EP and music video funded by Paisley 2021. The EP has received lots of radio play, appearances on STV, BBC radio, the BBC at the Fringe, and comments from many music people that she has immense talent and is one to watch. During 2017, her songs were selected for the Fatea UK Acoustic showcase compilation album, helped her win the Renfrewshire Live and Unsigned competition and be nominated for Female Artist of the Year by Radio Wigwam. Lisa also beat off significant competition to make it to the finals of the new Salute Music UK competition and the Radio Clyde Cash for Kids Jim Diamond Award. Lisa has been a proactive backer of the Paisley UK City of Culture Bid and was recently invited by the Provost to attend a “women of influence” award at the Town Hall. Lisa was referenced at the SAY awards ceremony as one of Paisley’s “new kids on the block” following in the footsteps of Paisley musical alumni such as Paolo Nutini. Lisa is currently working on her second EP, with the song “I do” which gained her a place in the Salute UK Finals scheduled as the first single release later in 2018. Long frustrated that she hasn’t been old enough to attend the gigs of some of her favourite bands, Lisa was super excited about playing King Tuts on 6th February, the day she turned 18! In April, Lisa was invited by the Scottish American Foundation to perform at New York Tartan Week to VIPs at concerts in Bryant Park and for the parade crowds on 6th Avenue. July and August saw her performing in London for the Mayor of London Gigs Big Busk competition.

This shouldnt be a problem if you give me a few days notice.

No I am afraid I do not offer this service.

10 minutes is all it takes.

Yes of course and add your own choices.

Yes, I bring a mic, stand and amp.

Yes I am very adaptable and love to learn a song specially for a customer.

My set has something for everyone and my vocals are very well suited for delivering the emotion in a song.

Standard Prices
All prices include:Sound equipment, pre event consultation and tailored set for you
NEW!Virtual services
Personalised Music Message
Book me to create a unique music video for you to send to a friend as a gift. This could be a birthday message, first dance song for a wedding anniversary, or just your friend's favourite song to cheer them up.
£15

Very pleased to have found Lisa, although being the bride meant I didn’t get to sit and enjoy the singing as much as I would have liked too everyone else enjoyed listening to her xx

Beautiful voice great for our event! just great to work with.

2017 has already been a year full of musical milestones for young Lisa Kowalski, and the future is looking bright for this free spirit. We are looking forward to seeing her in New York soon!”

So what of the EP? Titled Free Spirits, it’s a confident, buoyant offering. With years of experience playing live it’s no surprise that Kowalski’s own performance is top notch, but she’s also created a powerful group of songs with a bright folk/pop sound, all based on her own experiences. Opener Hearts Of Gold harkens back to the great atmosphere she found busking, with the chorus lyric explaining ‘The streets are paved with hearts of gold.’ The track – and indeed the whole EP – are slickly produced, with a professional sheen that allows you to fully absorb the songs. Kowalski has a lovely voice – soft and smooth, but capable of jumping up a gear and an octave at will, as she does on the lead in to the chorus of that first song. While the music is undoubtedly reminiscent of mellow tracks by Scottish songwriters such as KT Tunstall and Amy McDonald, there’s also small hints of country and Americana, and strong melodies throughout, not least in the final track where Kowalski is joined by a full band for a driving pop/rock number. . It reminds me of that song by Sixpence None The Richer… take from that what you will!