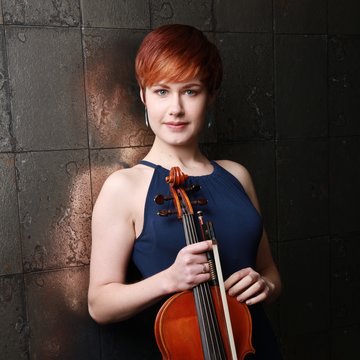 London-based violist who can be seen on stage with the BBC Symphony Orchestra one night, or on tour with Ministry of Sound the next!
3 of 5 photos
Violist
London

Lisa has performed around the United Kingdom with the BBC Symphony Orchestra, Scottish Ensemble, the Southbank Sinfonia, the BBC Concert Orchestra, and the London Symphony Orchestra, and recently debuted at the Wigmore Hall. She has enjoyed trials with the BBC Concert Orchestra, the BBC Symphony Orchestra, and the Royal Philharmonic Orchestra, and performed in the Alan Bennett play Untold Stories at the National Theatre and on the West End.   She was a competitor in the 2016 Lionel Tertis International Viola Competition, and has been awarded places on both the 2015-2016 LSO String Experience Scheme and the BBC Symphony Orchestra Pathways Scheme. She was a prizewinner at the North London Festival of Music, a finalist in the Kenneth Loveland and Brian Boak Outstanding Performer Awards, and a  recitalist for the New London Orchestra Young Performers Concert Series. She performed as solo violist for the Sydney Conservatorium’s production of Albert Herring, and for Sydney Theatre Company’s production of Spring Awakening. Lisa has extensive orchestral experience, performing in the Royal Albert Hall, the Royal Festival Hall, the Royal Opera House, Cadogan Hall, the Sydney Opera House, and the Sydney City Recital Hall.  Lisa has completed a Master of Performance with Distinction at the Royal College of Music under the tutelege of Simon Rowland-Jones. She has studied with Vicci Wardman, Annette Isserlis, and Caroline Henbest, and has had master classes with Thomas Reibl, Maxim Rysanov, Nobuko Imai, and Jennifer Stumm.  Lisa is very grateful for the support of the Richard Carne Trust, the Ian Potter Cultural Trust, the Tait Memorial Trust, and the Clemence Charitable Trust. Lisa is the proud caretaker of a 1930 Natale Carletti viola, thanks to the worldwide support of donors via a fundraising campaign.

Of course! I can be booked as a solo artist, but perform frequently with top musicians and can organise ensembles for your event if you are after something on a larger scale.

Life throws us all a curve ball or two on occasion, so I'll do my best to be flexible if your plans have to change. We can work together to come to a solution, so keep in touch!

I arrive at the venue about an hour before the performance time.

I work with my clients individually to tailor my programme to their event, tastes, and style. If you have special requests I'll always do my best to accommodate, whether it be a favourite piece, a national anthem, or happy birthday!

Short answer: yes. I bring my instrument and music stand. Sometimes if the performance is seated, I'll ask for a chair to be provided.

Making your event unforgettable is my speciality, so if there's a favourite piece you would like to hear, chances are I can oblige! Depending on the piece I will give you a quote for the extra rehearsal time and sourcing of the music.

The Queen's Birthday concert at Royal Albert Hall in 2018 is high up that list!

Standard Prices
All prices include:A pre-performance meeting, either via phone or in person if preferred, to discuss repertoire choices and event timings. Basic equipment including music stand and travel within zones 1-2 of London.
NEW!Virtual services
Personalised Music Message
Book me to create a unique music video for you to send to a friend as a gift. This could be a birthday message, first dance song for a wedding anniversary, or just your friend's favourite song to cheer them up.
£15

The rare opportunity to hear this trio was a musically enlightening occasion, made into an even more pleasurable experience as they entertained an appreciative audience.

the soloists acquitted themselves well, taking appropriate musical command and delighting the audience with their virtuosity.

Violists in the UK